Live AR for Broadcasts and Training

echnology continues to converge with our everyday lives and, in many ways, it’s almost like a beautiful form of illusionary art as realities are overlayed and we can engage in ways not previously possible.

Over the past several years in particular, we’ve seen the advancement of volumetric capture, deep learning, and live augmented reality broadcasts. There are almost magical qualities to live AR as it’s used to enhance and guide our viewing and training experiences.

Companies that utilize live AR or broadcast AR use modern technology to create an experience that enables users to immerse themselves in a realistic digital experience. The creator will want all users to be engaged and depending on the particular experience, there will be varying objectives to entertain, educate, and enhance brand experience.

Live AR provides an opportunity for users to be more than passive observers. Traditionally when viewing events with technology, people watch the action, but there’s little opportunity for interaction. Augmented reality makes it possible to become immersed in a shared digital experience.

When someone appears digitally in our workplace or on the stage, it creates incredible opportunities for engagement.

One of the coolest things about broadcast AR is the ability to make the AR character appear present wherever the experience is taking place. Visitors can have a photo taken beside a well-known character or take part in the action on a larger scale as a dragon swoops onto a field and amazes everyone who forgets for even a brief moment that the dragon isn’t real.

Live AR motivates students, keeps them engaged, and creates more memorable learning experiences for increased retention. Through the use of a simple cell phone, lessons suddenly transform into interactive experiences where figures, artwork, graphs, sketches, etc. become 3D images that can provide additional instructional information as well as a more hands-on experience for the tactile learner.

The educational component isn’t limited to students, either. Live AR is being used in training for safety workers, diversity awareness, planning and preparation for complex actions or procedures, and more.

For someone who typically wears the same color scheme – brown pants and a white shirt – all the time, I’ve never been much of a fashion guru so brands haven’t meant much to me and I didn’t really understand how augmented reality could change that until I met Ashley Crowder, CEO and Co-Founder of VNTANA at a conference in 2019.

As we discussed VR and AR at the women’s breakfast, Crowder explained how AR could be used to better promote brands, but I wasn’t necessarily impressed until she pulled out her phone and actually showed me what she meant. Within seconds, I was looking at a digital shoe, and being the hands-on learner that I am, suddenly I understood. It’s fascinating how technology can help you understand what you couldn’t quite grasp.

That was two years ago and today VNTANA provides a platform where retailers can instantly share a 3D showroom with customers who can make purchases from the comfort of their own homes or businesses.

Who Is Making This Possible?

From Magic Leap to Microsoft and Facebook, many stakeholders are interested in the future of augmented reality broadcasts and live presentations. While there’s definitely amazing work being done in the industry, we’re going to talk about a couple of smaller companies that are making live AR possible.

During the VR/AR Association Global Summit last month, attendees were invited to watch a live AR broadcast from Condense Reality, a company that works in volumetric video capture and deep learning to create streams in real time.

While I sat in my living room, I turned on my phone and watched a live presentation with Nick Fellingham, CEO and Co-Founder of Condense Reality. I didn’t view this on a 2D screen, however. Instead, Fellingham appeared as a hologram right here in my workspace. It was all very high-tech and exciting. And it’s evidence that “the future is NOW.”

The experience was memorable and it doesn’t take much effort to understand how Condense Reality will be able to use live AR to broadcast sports events, live performances such as theater or dance, training, and more.

Last fall, Condense Reality raised a £900,000 seed round and announced collaboration with BT, a global leader in communications services. With the support of companies such as BT, Condense Reality will be able to continue developing and optimizing holographic-style immersive streaming tech.

On the forefront of live AR for sports is Immersiv.io, a startup company working to enhance fan experience and create opportunities for them to be even more involved in the sports and gaming industries.

During the summer of 2020, when most of the world was in the middle of a lockdown due to COVID-19, Immersiv.io joined SAP.iO along with other startups to identify ways technology can be used to set new standards for the fan experience. The fall cohort was held in collaboration with SAP Garden, a multipurpose sports arena being built by Red Bull at the location of the former Olympic cycling track stadium in Munich Olympic Park.

Tools such as ARISE Home will encourage sports professionals to connect with fans in a new way and fans will be able to interact more freely with the action taking place in the game. Live AR also allows them to personalize viewing experiences.

The possibilities for use of augmented reality for live broadcast and training are limitless. To be quite blunt, anything we can do in physical reality can be enhanced and not only does live AR engage, entertain, and educate users, it also provides a way to enhance experiences in new and exciting ways.

If we think back to the popularity of illusionists in the late 19th and early 20th centuries, they were popular because people were drawn to the unknown, the magical, the wonder of deception.

Even though we’re more aware now of how most illusions are created, it doesn’t lessen our fascination with the possibility that the impossible has occurred, and until humans no longer possess that sense of fascination, technology such as live AR will continue to thrive. 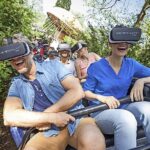 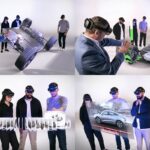