Virtual reality (VR) simulations with repetitive training exercises have seen an increase in popularity as they provide a safe and efficient way to mentor students.

With many use cases in aviation and healthcare, the benefits have become clearer as training costs decrease and student skills improve, giving tutors an affordable and efficient way to teach niche skillsets and boost access to VR training previously inaccessible in parts of the world.

The Czech-based company designed its solution for goalies seeking to test their skills in multiple competitive scenarios, with the simulation extending to other team positions as of June 2021.

The Value of Sense Arena

The haptics create a realistic and immersive experience to simulate a virtual puck hitting the stick, which can be felt in the user’s hands.

Sense Arena lets users train on their own and repeat drills to increase reaction time. Coaches can also assess trainers via the official cloud service to track and improve performance.

According to sources, roughly 10 National Hockey League (NHL) goalies, including Philipp Grubauer of the Colorado Avalanches, have adopted the solution.

His team is currently riding a 5 week win streak and remains at the top of the league.

According to an NHL press release, its European teams are have begun using the solution on actual ice rinks for full immersion.

But some issues have been raised, namely as athletes cannot recreate sliding across the ice in virtual games.

Customers can purchase Sense Arena, which starts at €55 per month, from its official sales page and with further quotes available for teams and training centres. 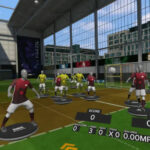