A number of London institutions contributed pieces to the augmented reality experience.

With social distancing precautions in place to prevent the spread of coronavirus, many indoor venues have had to close their doors. That includes art galleries. While galleries would love to simply put the art outside for people to see, that’s not exactly an option. Except, of course, through augmented reality.

What Is The Augmented Gallery?

This time of year has traditionally been the start-of-season in London’s West End. This year, this has been hampered by shuttered venues and fewer people traveling.

So, the National Gallery, National Portrait Gallery, Royal Academy of Arts, and Sky Arts all contributed to a free, mile-long, twenty-stop walking tour which marked the launch of Heart of London Business Alliance’s initiative called Art of London.

“Attracting the public back to the area safely and responsibly has never been more important,” Heart of London Business Alliance Chief Executive Ros Morgan said in a release shared with ARPost. “We hope that The Augmented Gallery will play some part in welcoming back visitors to explore and enjoy this open-air art trail around this historic area so rich in art history.”

The tour consists of QR codes in frames made by creative communications agency Premier to fit the size of the physical portraits. Through a free app by Playlines, the codes bring up the painting as well as audio commentary. As Playlines Creative Director Rob Morgan told ARPost in an email:

“Some of the coolest cross-pollination that has come out of this project has been working with educators and curators from the major galleries to develop an immersive, companionable quality to the audio commentary. We spent a lot of time working out how to communicate the speaker’s relation to the user and developing scripts out of informal conversations.”

The locations were chosen to present the artwork in impactful ways while still being accessible.

“[Arranging pieces] was a very detailed process, for one, to create the right aesthetic environment and mood for each specific portrait, and also for very important accessibility factors, so that each and every location is a unique, safe, and inspiring place in itself and brings real flavor to each piece of art,” Playlines Executive XR Producer Muki Kulhan said in an email to ARPost.

From the perspective of the institutions, the augmented reality gallery means presenting the art in a way that is safe for both patrons and the works of art themselves. For visitors, the option is more accessible than a gallery, but still incorporates the physical galleries and the neighborhoods of London that would be lost if the QR collected together in a book.

“[The Augmented Gallery] gives us the chance to showcase some of the Nation’s favorite paintings out in the open for everyone to enjoy,” said National Gallery Director Dr. Gabriele Finaldi. “By bringing a series of masterpieces to the West End through the lens of augmented reality, visitors to the area can enjoy a taste of the treasures we have inside the National Gallery.”

Assembling the Team Behind “Art of London”

A lot of key players came together to make the Augmented Gallery and the Art of London initiative take shape.

The Heart of London Business Alliance is an organization of London businesses and institutions that promote commerce in the area through media campaigns, working with the government, and creating innovative initiatives like Art of London.

Art of London is the larger cultural strategy of which the Augmented Gallery is but a part. This initiative aims to make “art in every form” more available and more attractive to the general public by showcasing it in non-gallery venues.

The Heart of London Business Alliance had pre-existing connections with Premier, which made it easier for everything to come together. Between the three more classical galleries that contributed and Sky Media bringing in more modern representation, there’s something in the Augmented Gallery for everyone and everyone can find it.

A Variety of Art and Artists

The organizations coming together to populate The Augmented Gallery also provide visitors a wide range of artistic representation. Artists represented range from Pierre Seurat to Tracey Emin and subjects range from William Shakespeare to Sir Ian McKellen. Again, selecting the representative pieces and their locations was a team-based labor of love according to Kalhun:

“All [galleries] provided a selection of art pieces that we were able to consult on based on what we felt would make the best Augmented Gallery experience for both visuals and audio, as well as fit best within the environment of each location… [Sky Arts] also provided five winning portraits that added a fantastic contemporary feel to balance some of our other more classical and heritage selections from the museum institutions. “

The experience will also be available at the same time as the annual announcement of the Portrait Artist of the Year Award by Sky Arts. The award has been presented by actor Stephen Mangan since 2019. In the release, Mangan commented:

“To see the likes of 2020 winner Christabel Blackburn and 2019 winner Duncan Shoosmith displayed in this app alongside greats like Van Gogh and Titian is a genuinely proud moment. This is such a great initiative that people can enjoy safely outdoors in the heart of London’s West End and I hope it introduces these timeless classics and contemporary masterpieces to new audiences.”

The Augmented Gallery, which will be available through July 1, doesn’t just overlap with the Portrait Artist of the Year Award. A number of the art institutions involved in The Augmented Gallery are planning on launching staged reopenings later this month.

“Audiences have become more accustomed than ever to accessing cultural content that’s on-demand and in-context,” said Morgan. “AR allows for a close-up encounter with great works of art out on the street, but more importantly, it allows for the street itself to become a canvas.” 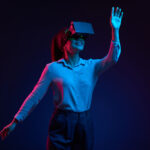 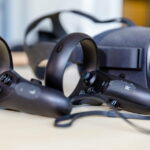