What Taqtile is up to with the military and what it means for the rest of us.

Last week, the company announced that they, in partnership with tech consulting company Booz Allen Hamilton, are working together to “test the security, scalability, and resilience of 5G networks and the advanced capabilities of AR/VR” as part of a project with the Department of Defense (DOD) worth over a half-billion dollars.

How Taqtile Arrived at JBLM

Taqtile’s role in the project will specifically involve its Manifest platform, according to a release shared with ARPost.

“The ability to use Manifest and 5G to put knowledge at the fingertips of frontline military personnel will make them exponentially more efficient and effective,” Taqtile CEO Dirck Schou said in the release.

Manifest was launched in 2017 as essentially an on-screen to-do list. It has since grown and developed into a full-service remote assistance and collaboration platform leveraging shared 2D and 3D assets. Most recently, the platform saw a huge update late last year.

Taqtile’s involvement in the project gives them the opportunity to showcase their product, as well as to use it in unique collaborations and configurations with the platforms and products of other major companies. That includes Booz Allen Hamilton.

“Combining applications like Manifest with other technologies including 5G, AI/ML, and cybersecurity helps our clients see the power of XR for mission execution,” Booz Allen Hamilton Senior Director Eric Billies said in the release.

The initiative, which will be taking place in Washington State’s Joint-Base Lewis McChord (JBLM), is one part of a $600M project that DOD announced in October. Also involved are other major tech companies including AT&T, Nokia, Deloitte, and GE.

Taqtile’s involvement is part of an ongoing relationship between Taqtile and DOD. Taqtile previously received an innovation contract through the US Army and worked with the Airforce Institute of Technology to measure the impact of AR on technician performance.

These military projects are also not Taqtile’s first or only foray into 5G collaboration and research. The company first came to our attention as graduates of the 5G Open Innovation Lab founded by NASA, T-Mobile, and Intel. They were also named Microsoft Partners of the Year in 2020 and received funding through Magic Leap’s Independent Creator Program in 2019.

“While 5G will eventually deliver significant benefits to consumers, enterprises will be the first to realize the advantages,” a representative of Taqtile told ARPost via email. “AR will be the poster child for 5G’s benefits.”

One of the major benefits of 5G that we are used to hearing about from the consumer side is speed. This is closely linked to XR because XR applications require greater computing power than 2D media and therefore are more impacted by latency when run on slow networks. However, there are other less obvious benefits to 5G that the JBLM project will showcase.

For one, 5G has the potential to create more reliable coverage areas – particularly in campuses that consist of multiple buildings. 5G also gives the ability to run sensitive applications on more localized networks within a larger coverage area. This allows, among other advanced functionalities, the allocation of bandwidth.

“The sprawling footprints of industrial organizations beg for technology like 5G,” said Vincenzo. “There are many enterprises that haven’t deployed wireless infrastructure for cost or security reasons but the recent adoption of mobile digital tools by frontline workers to perform daily tasks makes 5G a valuable investment for those very organizations.”

This doesn’t only hold promise for military bases, but also industrial complexes, large hospitals, universities, and other institutions.

The flow of research and innovation from military to enterprise to consumer uses and markets is a familiar one. While most of us hear about 5G as consumers, this is a new technology that is still rolling out. Some consumer use cases are already supported by 5G but the testing ground for other affordances will naturally be the military base and the industrial complex.

Whether you’re interested in 5G XR in military use cases, enterprise use cases, or as a consumer, Taqtile is expanding the use and understanding of these emerging technologies. 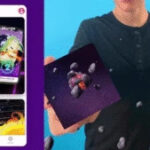 WHY AUGMENTED AND VIRTUAL REALITY ARE HERE TO STAY: THE MERGE CUBE 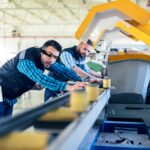