The United States Space Force, a space service branch of the US Armed Forces established by former president Donald J. Trump, is currently in the process of training the next generation of mission operators using VR simulations.

As reported by The Washington Post, operators-in-training can interact with virtual duplicates of multimillion-dollar military satellites using an Oculus Quest headset, removing the need for conventional training simulators which can cost millions to build and deploy. Developed by government contractor SAIC, the platform simulates national security risks designed to prepare operators for any eventuality they may face, such as missile response warnings and major satellite failures.

According to The Washington Post, members of Space Force—otherwise known as “Guardians”—can select from a variety of predesigned avatars before immersing themselves in VR simulations of the International Space Station as well as Mission Control. Here, field experts lead trainees through various simulations that have them interacting with antennas, solar panels, and a wide range of other complex machinery. Users can even highlight key areas with their laser pointers and draw various notes and references in the air using their Touch controllers.

“Sometimes you go to these demos, and it’s just some nondescript room, but it doesn’t really look like your (real world) environment,” said John Lynch, program director for SAIC, who manages the firm’s contract with the Space and Missile Systems Center. “We wanted the experience (to feel) like you were actually there.”

With the United States Army having awarded SAIC with an $830 million contract this past February, it appears as though the US military is going all-in on VR/AR technology.

Last October we learned that the US Army was experimenting with AR goggles for military dogs, allowing handlers to remain out of harm’s way while remaining in communication with their partners. During CES 2020 it was revealed that the US Air Force had already been using VRgineers military-grade VR headset as a way to train its pilots for various combat scenarios.

For more information on the US Space Force visit here. 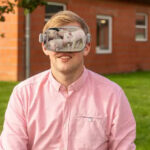