Completing your weekly chores can be an absolute drag, but doing repetitive tasks like vacuuming the house might not always be so boring when VR and AR come into the mix.

Reddit user ‘VoxelGuy‘ showcases a novel idea with a VR prototype vacuuming minigame built around a 1:1 virtual representation of his living room, which he initially created for a few other cool ‘virtual-augmented’ reality experiments.

With it, VoxelGuy vacuums up virtual Euros using an Oculus Quest and Touch controller strapped to a physical vacuum cleaner; he envisions the in-game currency could be used to buy virtual decorations or new room skins to make it even more immersive.

For now, Voxel Guy’s minigame is a tailor-made prototype, which he made by recreating his own space in Unity. It’s a fun idea though that shows that chores could be, well, less of a chore one day.

Still, it may be a bit too soon for such a game to come to either VR or nascent AR app stores near you. Critically, even with its ability to detect and define obstacles via its Guardian boundary, Oculus Quest lacks the ability to detect a fine level of object granularity on the fly, such as the grit and grime that inevitably finds its way into every possible nook of the room. Also, if you miss a big piece of lint, and you wouldn’t really have a way of knowing since the space is 100 percent virtual.

Ideally, it could be more suited to a VR device with detailed room-mapping and high resolution RGB color pass-through, so users could adapt the game to their own spaces automagically, and choose which items are represented purely in the virtual space and which ones can be seen directly by the user, like the floor itself. That’s not available on consumer VR headsets now, but it could be in the future.

Adapting it to a bona fide AR headset, like HoloLens 2 or Magic Leap 1, could be a fitting target platform too. With it, you’d only need to represent a few items virtually, such as the coins and decorations. Considering however that very few people actually own such an AR headset—high prices keep them well out of reach of consumers—a version of VoxelGuy’s prototype could approach ‘killer app’ territory when device costs inevitably come down. Also, a cordless vacuum would be nice too.

VoxelGuy has a load of other experiments too, such as his space-themed escape room game, which uses his own furniture as props. If you’re interested in learning how to create these sort of ad hoc virtual rooms yourself, check out VoxelGuy’s guide on how to recreate any room in Unity and deploy it on Oculus Quest. 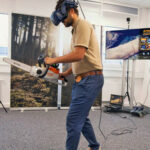 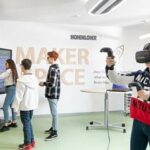