Could This VR Sketching Tool Finally Be Coming Of Age?

Oluwaseyi Sosanya, founder of Gravity Sketch, tells Design Week virtual 3D sketching is a “gateway to new abilities”, so long as the industry can overcome a “cultural hurdle”.

The lockdowns of 2020 forced many designers out of their studios and into makeshift home offices. As a result, they needed to adapt to new ways of working, often away from their colleagues.

Some design disciplines were easier to migrate to home working than others. The inherent tactility and materiality of product design meant being outside of the studio posed a challenge to many.

For Oluwaseyi Sosanya and Daniela Paredes, the circumstances posed by lockdown reaffirmed the relevance of their Gravity Sketch invention. The virtual reality (VR) powered suite of tools and software, initially launched in 2018, is designed to allow cross-disciplinary teams to collaborate remotely and ease designers’ dependence on pen and paper.

“There was no great communication stream”

Going from pen and paper to CAD (computer-aided design) software is a huge leap, Sosanya explains, and with it comes the potential for inefficiencies and compromises.

Gravity Sketch was an attempt to allow creatives to “stay true” to a design throughout the production process and keep everyone happy and informed along the way.

“We all understand 3D in the same way”

Users can then apply these tools to sketching in 3D – this is a crucial part of the platform’s offering, Sosanya says, since “we all understand 3D in the same way, because that’s our life”. The process of translating a 3D image in the mind, into a 2D sketch on paper, and then into a 3D piece in CAD can really slow up the design process, he adds.

Sosanya is quick to point out that Gravity Sketch is not positioned to take the place of pen and paper sketches or CAD, but rather act as a “wedge” between the two.

“Making the jump between pen and paper and CAD can involve a handoff between several different people – our idea is to be a bridge between the two, so the next person along the line can pick up and run with the original idea seamlessly,” he says.

“Akin to working in a design studio together”

Beyond speed, what other benefits does VR sketching bring to product designers? Sosanya says the one of the most attractive features of Gravity Sketch is being able to work at any scale.

Designers are able to zoom in to see angles they wouldn’t be able to explore on paper, which “drives confidence” in the overall design, he says.

“You can have communication at such a granular level of something that has yet to exist in reality,” he says. Being able to examine work so closely is particularly useful in lockdown, since “working spatially in this way is akin to working in a design studio together.”

All of the problems that come from a usual design process are amplified when designing remotely. A 40% rise in Gravity Sketch users this year reflects the challenges designers have faced outside of the studio.

But while the platform is enjoying success in a diverse range of industries now, from jewellery design to automotive and industrial design, Sosanya says wider uptake of Gravity Sketch rests on studios overcoming a “cultural hurdle”.

“There are designers who see no problem with their current workflow and we know this might make it harder for them to adopt our offering,” he says, adding that designers often have a “well-perfected muscle memory” when it comes to sketching. “We’ve found the biggest uptake in those studios who don’t view new tech as a hindrance, but as a gateway to new abilities.”

“Smaller design studios have not been adopting new tech”

Right now, students and universities make up a large portion of Gravity Sketch’s userbase. Universities are great testing grounds, Sosanya says, because people are there to challenge the status quo and try something new.

The biggest priority for Sosanya is making sure Gravity Sketch is accessible. Many platforms and software take months, if not years, to understand inside and out. Sosanya says the onboarding period for Gravity Sketch is around eight hours.

This is particularly important for many smaller studios she says, which have been working under increased pressure during the pandemic.

“Smaller design studios have not been adopting new tech in the same levels as bigger studios and this is because they’re having to work really hard in exceptional circumstances,” Sosanya says. “Bigger studios have been able to afford to pause projects somewhat and take the time to understand new tech.” 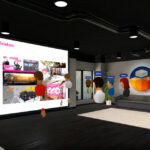 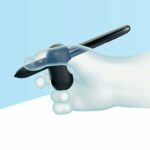