How Augmented Reality and 3D Tech Is Changing the Food Game

Brands like Panera are embracing AR as it increases craveability and sales.

Augmented reality seems to be popping up everywhere these days from a dragon on top of the Flatiron building to trying on makeup without actually trying it on. But, when it comes to how certain industries use it, it’s not for everyone. It is, however, a blessing for the restaurant and food industry as it’s been proven to drive craveability and sales.

Before I get into the why, you’re not just going to go out and get into the “AR game” without doing some research so I’ll try and save you a step by giving you three pieces of advice, along with some real-world examples of success.

1. There’s a Bigger Audience Than You Think

The type of customer and how they interact with your brand is a good place to start, especially if they do so through their mobile phone, dining apps, and other social media platforms. The good thing is that 70-75% of people aged 16-44 are aware of augmented reality, so there’s a good chance that they’re also connected consumers who look to – and are influenced by – that type of engagement.

2. It Only Works If It Looks Real

OK, so we have to nerd out for a second because the level of sophistication, detail, and quality that goes into digital imagery – especially when it comes to 3D technology and augmented reality – is complicated, yet crucial. On top of that, it’s relatively new to the industry so brands might not be clamoring to get on board – there are too many unknowns.

But that’s always an inherent risk when leveraging a new technology and – with a food AR experience in particular – you need the menu item to look as delicious as it would in person. I can’t stress that enough: the quality of the imagery and 3D models you’re using to create the digital version of a piece of food (i.e. the ‘digital twin’) needs to look exactly the same (if not better) to entice someone to not only want it, but to go out and buy it. That’s the art of craveability.

3. If You Do It Right, You Won’t Be Disappointed

Once you have that realistic digital twin, you have several options of what you can do with it. You can have interactive menus like Bareburger or even ‘burn down’ the competition like Burger King. But it’s more than just hamburgers as other iconic food brands are getting into the AR game.

Maybe you’re craving a wrap instead? Well, Panera recently did some AR campaigns via Snapchat and Facebook and the results were spectacular (full disclosure: I helped them with the project, which is how I know it works!). The well-known fast casual bakery and cafe chain partnered up with QReal, which specializes in creating lifelike models of cuisine (i.e. realistic digital twins) that are optimized for augmented reality experiences. If you haven’t heard of them you’re not alone but you’re going to start hearing a lot more about similar companies from now on. Why? Simply because the results of these campaigns are phenomenal. Below is an infographic that sums up the success Panera had. QReal also performed an AR study in partnership with some prominent universities and found that people are more likely to crave a dish that they can see in full photogrammetry, which is a fancy way of saying a photo-realistic 3D model. So if the campaign results weren’t enough, there’s now legitimate academic research that proves it works.

Unlike some other new technologies, augmented reality is perfect for the food and beverage industry. I’ve seen its impact firsthand and the ROI is there – it leads to an increase in foot traffic, engagement, and sales. But as with most things, if you’re going to do it, do it right the first time because you may not get a second chance.

How Augmented Reality and 3D Tech Is Changing the Food Game 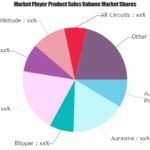 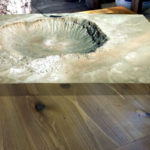 Augmented reality could be the geology classroom’s killer app