Travel the Earth, share family photos, and play games with loved ones of all ages in this unique social VR experience.

Connecting with family isn’t always easy, especially in today’s climate. The global outbreak of COVID-19 has led to the government-mandated lockdowns around the world, separating countless families, friends, and loved ones in the process. Now more than ever we find ourselves in desperate need of human connection. This is where Alcove comes in.

Available free on Facebook’s Oculus Go VR headset, AARP Innovation Labs’ Alcove is a brand new social platform that allows up to four loved ones to connect in VR for some good old-fashioned family time. Only instead of sitting down in the den, friends and siblings connect via their own virtual home where they can participate in a wide variety of interactive games and experiences perfect for users of all ages.

Upload family photos, both 2D and 360-degree, and sit down for a next-gen slideshow; meet up and explore the Swiss Alps from the comfort of a flying hot air balloon; participate in immersive mediation and a variety of brain-building activities; customize your virtual home with family photos; or kick back and enjoy some compelling AARP TV, articles, and documentaries. You can even upload your own videos and host a virtual screening of your favorite home movies.

Each room of your virtual home features new gateways to explore. By selecting the world map, for instance, you can teleport to exotic locations around the globe, from Tokyo and Rome to Vienna and Prague. Or you can just head to the living room for a game of checkers.

Alcove is more than just a social VR platform, however. The app is designed to combat social isolation by allowing friends and families members to connect in a more intimate way, regardless of age. As a result, many of the activities and features included as part of Alcove have been tailor-made for more seasoned users who may be less comfortable with VR technology. This includes a handful of health & wellness applications ranging from therapeutic exercises to cognitive training games, each of which aimed at keeping your brain active and sharp.

Whereas the rapid development of modern technology can often drive a wedge between the different generations, Alcove represents a rare opportunity to bridge us together, offering a virtual “middle ground” of sorts that resonates with all ages. It’s not often you come across a VR experience capable of pleasing both the grandkids as well as the grandparents, which is exactly what makes Alcove such an effective platform.

The Alcove beta is available free via the Oculus Go, Facebook’s 3DoF standalone headset. Still in it’s early stage, users can expect a regular series of updates as AARP Innovation Labs continues to introduce new content in the form of additional experiences and features.

For more information on Alcove and its many use-cases, visit alcovevr.com.

This post was created in partnership with Alcove, a product created by AARP Innovation Labs. 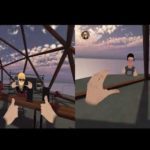 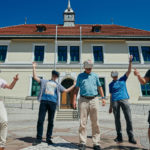