You can most certainly create one at home too.

Augmented reality is slowly but surely moving past the threshold of novelty and into the realm of useful technology. Investments in the AR market made by companies like Facebook, Intel, Alphabet, and Samsung have fueled this innovation. Currently, the Augmented Reality market is projected to expand to $72.7 billion by 2024.

Growing demand in the healthcare industry for AR modeling and 3D visualization, the appearance of augmented reality head-up displays (HUD) in the automotive world, and the growing use of AR in e-commerce are all contributing to this expected AR boom. However, there are some unsung heroes.

Nowadays, augmented reality app development is more accessible than ever. Anybody with a computer and a mobile device can have their own interactive world. This has led to the creation of some impressive applications. However, augmented reality Sudoku solvers truly take the cake. Utilizing machine learning, as the name implies, these applications can solve even the most tedious sudoku puzzles in seconds.

Today we are going to show how you can make your own AR sudoku solver and look at what this complex tool has us excited about the future of augmented reality. Though, we are not too sure Stanley Hudson from The Office would approve. So, tread carefully.

Even if you have never experienced augmented reality, you have surely seen it modeled on the big screen. Films like Minority Report and Iron Man might pop into your mind, although of course, the AR in movies is created through special effects, rather than by creating a working AR.

In short, augmented reality is the result of using technology to superimpose information like sounds, images, and text onto the real world. Unlike virtual reality (VR), which takes you to a virtual world, augmented reality adds to your current reality. You can trace the history of augmented reality all the way back to the 1960s, with Morton Heilig’s simulated motorcycle experience and Ivan Sutherland’s „Ultimate Display.“

s mentioned above, there is a wide range of applications for AR technology. Researchers are even looking at ways augmented reality could be used to enhance education, improve therapy, and change our behavior.  A little closer to home, it is making its way into our mobile devices and applications. Mobile games, like the legendary Pokemon Go, use AR to allow players to go out and interact with the real world.

Believe it or not, AR sudoku solvers are some of the most innovative uses of this technology. Let us explain.

Sudoku solvers show us what AR could be…fast.

This is where AR sudoku solver steps in. The mobile app Magic Sudoku, created by the start-up, Hatchlings, can solve this puzzle instantly. By simply aiming your camera at any sudoku puzzle, the answers are displayed directly on your screen. You don’t have to take a picture and save it for later. All of this happens in real-time.

One of the biggest challenges in advancing augmented reality over the years has been improving the speed and consistency. Like any other type of modern technology, users want technology that works quickly and efficiently. Thankfully, this is now starting to happen. Developments in everyone’s favorite AI science, machine learning, have made it possible for AI and AR to recognize faces and objects better than ever.

For example, Google has been very vocal about its investment research into practical uses of AR in the real world. With Google Lens, you can take your phone camera and point it at a restaurant on the street to pull up the latest reviews and the star ratings.

Sudoku solvers are a reminder that AR technology is not only a cool gimmick, but also a fast tool with limitless potential. Perhaps, you would like to build one for fun? 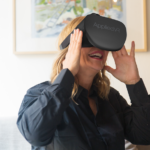 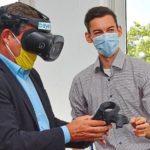