Mountain biking champion Kate Courtney leads us through a VR tour through the human brain in episode one of this multi-part series.

According to research conducted by West Virginia’s Brain Injury Research Institute, an estimated 1.6 – 3.8 million sports and recreation-related concussions are reported in the United States each year. That’s an extremely concerning number given the fact that brain injuries lead to more deaths than any other sports-related injury.

In an effort to help better educate the public on this invisible epidemic, Standford University nonprofit social venture TeachAids launched CrashCourse Football in 2018, a VR education module designed to serve as a free resource for athletes, parents, coaches looking to learn more about the prevention and treatment of concussion-related injuries.

Available free on Oculus Rft/Rifts, Oculus Go, and YouTube, CrashCourse Brain Fly-Through offers users a rare look at the physical and emotional effects of concussion-related injuries via a 360-degree tour of the human brain, from the blood vessels and nervous system all the way down to the cerebrospinal fluid cavities. Brought to life by ​Stanford University’s Neurosurgical Simulation and Virtual Reality Center, the 3D tour also includes narration by mountain biking champion Kate Courtney, who breaks down her own experience with brain injuries as footage from several of her nerve-wracking races plays in the background.

“It’s exciting to see leadership across our USOPC national governing bodies working together to embrace evidence-based education to make our sports safer,” says ​Dr. Michael Stuart, Professor of Orthopedics and Sports Medicine at Mayo Clinic in Rochester MN and Chief Medical and Safety Officer for USA Hockey, in an official release​. “With its 10-year history of developing world-class products, TeachAids has once again produced groundbreaking and compelling content to further health education.”

Additional modules are on the way and will arrive as part of future updates to the existing free app, the next being CrashCourse Symptoms Story Wall, a massive VR database filled with personal stories from those who’ve suffered concussion-related injuries in the past.

“The CrashCourse team consists of leading advisors across the medical field working to take the latest science and transform it into knowledge for our sports community,” says ​Dr.​ ​Josh Bloom, Team Physician for the Carolina Hurricanes, USA Baseball and Sports Medicine Physician with the Carolina Sports Concussion Clinic​. “This product serves as an effective resource to understanding the complexities of the human brain and why promptly reporting injuries is so important.” 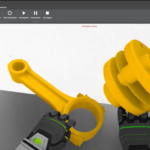 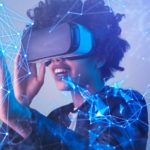 Immersive Learning: The Future Of eLearning