Flap your wings as hard as you can to get your Flugtag flying machine off the dock.

Red Bull Flugtag is a wacky annual event where teams of Red Bull-fueled aviation visionaries get together to launch their homemade, human-powered aircrafts off a 30 ft high dock, hoping it will soar across the water like a graceful albatross caught up in the North Pacific winds.

That’s the idea at least.

In most cases the large flying contraptions end up looking more like a lame duck as they take a steep nose dive straight from the edge of the dock and into the water, resulting in some pretty amazing and hilarious crashes.

To help get people into the spirit of the big event, Red Bull has partnered with VR/AR solutions company Giant Lazer to create a Flugtag VR experience that puts you in the flugtag workshop for a glimpse of what it’s like to build your own flying machine using Red Bull cans, flip flops, cables, boxes, and life preservers.

Jakub Korczynski, CEO and Founder of Giant Lazer, talked with VRScout about their Red Bull Flugtag VR experience saying, “People love the flight mechanics, where you have to move your arms rapidly to flap your virtual wings.”

The energy drink company has taken a unique approach to their marketing by sponsoring everything from extreme athletes in sports like BMX, aerial acrobatics, skydiving, drifting, and slag to extreme dance competitions and eSport events. Their Flugtag event, which attracts thousands every year, is just another example of the companies outside-of-the-box when it comes to engaging with consumers.

Korczynski talked about how the partnership between Giant Lazer and Red Bull came about:

“Red Bull is continually looking for new creative ideas to promote their brand. We were testing a VR experience similar to Flugtag in our lab, and one of our team members suggested that this idea would work great for Red Bull Flugtag. So we called them,” said Korczynski. From there the company demoed their idea to Red Bull who imediately fell in love with the concept. “That’s why our concept quickly caught on, and they decided to partner with us.”

Red Bull Flugtag VR debuted during last year’s event with thousands of people lining up to jump into an HTC Vive to create their own flying machine. Attendees had the opportunity to not only view the vertigo-ncuding action, but actually compete using their own hand-built craft.

Bringing realism to the game meant researching Flugtag events from previous years. Giant Lazer looked at photo archives and maps to create 3D models of Gdynia, Moscow, Belgrade, and Istanbul. They even looked at small details such as umbrellas, bands, wall screens, and buoys and made sure they all had the Red Bull branding.

Once you’ve assembled your ‘virtual stork’, you can take it to the dock and test your luck. Flap your wings as hard as you can using the HTC Vive controllers! The harder and faster you flap your arms, the better you’re chances of soaring gracefully from the dock; flap to little, and risk belly flopping into the waters below.

Unfortunately, the COVID-19 pandemic has forced the cancellation of this year’s Red Bull Flugtag event, making it a perfect time for Red Bull to make their Flugtag VR experience available to the public.

Anything is possible. After all, this is Red Bull! 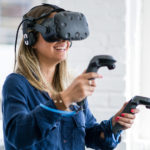