3 AR Games to Try During Pandemic

Fun underrated augmented reality games to play while you are stuck indoors.

The COVID-19 pandemic is causing everyone to stay at home, pick up new hobbies, and learn something new. AR games have seen a spike in popularity as new users learn about the technology.

Some games like Pokemon Go and Harry Potter: Wizard’s Unite have gotten mainstream recognition. These games get you out of the house to explore around your neighborhood. However, there are lots of AR games that showcase the technology inside of your home too.

Below are three augmented reality games you’ve probably never heard of. They are perfect for playing inside of your house or yard during the pandemic. These games are all interesting, unique, and fun to play.

Wildeverse is an AR game that has you helping scientists to discover and save wild apes. This game has over 70 individual missions to play through. The entire game is a long storyline that has you meeting and helping different animals virtually.

Augmented reality transforms your surroundings into the jungle. You explore and use your phone to track and complete missions. Most of the missions involve searching for clues or interacting with apes.

In between missions, you communicate with animal scientists looking to research wild apes and help you progress the story forward.

The game was developed by Internet of Elephants in collaboration with Borneo Nature Foundation and Goualougo Triangle Ape Project. The game is unlike most or all other AR games you’ve ever seen. Best of all, Wildeverse is free for both iOS and Android.

Euclidean Skies is a sequel to Euclidean Lands which you may have heard of in the past. In the new game, you have to sell over 40 different puzzles by rotating and shifting different blocks.

With augmented reality, you can circle around each structure as you play, giving you a 360-degree view of your playing field. Each castle is projected in front of you in your house.

As you pass levels, the AR game gets tougher to play. Euclidean Skies will give you a brain workout in addition to getting you up off of the couch to move around.

Brand new is an endless mode in the game, which lets you rotate blocks indefinitely for as long as you can go. The game also features some boss fights to challenge your brain.

Overall, Euclidean Skies is one of the most gorgeous looking AR games you can play. It’s well worth its $2.99 price tag in the App Store.

Escape rooms are a popular night out around the world. Unfortunately due to the pandemic, all of them are now shut down temporarily. Luckily, ARia’s Legacy is a great augmented reality escape room game.

If you aren’t familiar with escape rooms, you have to solve multiple puzzles within a time limit in order to “escape” from the room. In ARia’s Legacy, you are tasked with solving the disappearance of a girl named Aria. There are over 50 different levels to play through, which is an awesome quality.

In each level, you have to solve puzzles and use virtual keys to unlock locks. There are letters and messages filled with hidden meaning that you have to decipher in order to progress.

ARia’s Legacy is one of the most ambitious AR games you can play. Your entire room is transformed into part of the game. You can play the first four levels completely free from the App Store and then pay $2.99 to unlock each chapter as you go.

A lot of the most popular AR games like Pokemon Go, Ingress, and Harry Potter take you outdoors. With the pandemic, this isn’t the easiest or smartest idea. The AR games above can be enjoyed in the comfort of your own home. They are high quality and underrated and do a great job of showing off the technology.

What underrated AR games are you playing at home during the pandemic? 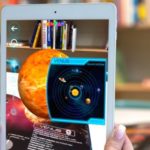 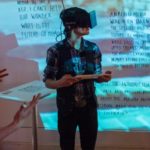