The spin-off from Oxford University has already proven the effectiveness of the gamified VR therapy in treating fear of heights.

Mental health treatments will become more effective and available to a larger number of patients thanks to VR technology. This is one of the key takeaways of the white paper published by Oxford University spin-off, Oxford VR (OVR). In the white paper, the pioneer gamified VR therapy developer shares the results of their own clinical trials. These data are put in context against various statistics of traditional mental health therapy.

The white paper is titled Game On: How VR Therapy Is Making Mental Health Treatment More Engaging and More Effective. In the white paper, the authors present relevant statistical data about traditional face-to-face therapy, which prove a high abandonment rate – 60%.

By contrast, the authors show how their gamified VR therapy works and the results they obtained in a landmark clinical trial. The patients wore VR headsets and were immersed in various environments and real-life situations where they had to control their fear of heights. Instead of having to imagine these situations, they could see and experience them.

As the therapy contains several levels of difficulty, they could get accustomed to each situation before they had to perform various tasks. These tasks include throwing objects over the edge of a high-rise building or walking down a suspended platform to rescue a cat.

OVR’s therapy approach is not only innovative. It also has the potential of addressing the needs of a larger number of patients, who will no longer need to connect in person with a therapist. At the same time, top experts can free up their schedule to attend to the most difficult cases, while regular patients receive the gamified VR treatment.

At the moment, Oxford VR has working partnerships with three healthcare providers: the NHS in the UK, the National Mental Health Innovation Center (NMHIC) in the US and AXA Hong Kong.

Like any form of healthcare, the mental health therapy based on VR had to go through the usual phases of tests, approvals and clinical trials. As the Deputy Director of NMHIC, Mimi McFaul, explained in the white paper:

“We thoroughly vet technology companies and look for specific quality metrics. This includes whether or not the technology is backed by research, is scalable, and has the potential for significant clinical impact. OVR meets all of these criteria and approaches mental health innovation with scaling and clinical impact in mind.”

For Oxford VR, the turning point was the 2018 clinical trial, whose results were published in the Lancet Psychiatry journal. Their gamified VR therapy against the fear of height consisted of six sessions of 30 minutes each, delivered over a period of two weeks. The results indicated a 68% success rate in reducing the fear of heights, which the patients maintained ever 4 weeks later in the follow-up session.

These results are superior to those achieved by premium therapists in face-to-face sessions.

A Team With Remarkable Track Record

OVR consists of a multi-disciplinary team, specializing in the key areas relevant for gamified VR therapy. Co-founder Daniel Freeman is a Professor of Clinical Psychology and NIHR Research Professor at Oxford University’s Department of Psychiatry. He joined forces with Barnaby Perks, an entrepreneur with extensive experience in building pioneering digital projects and former CEO of Ieso Digital Health, a company specializing in online cognitive behavioral therapy.

The latest addition to the OVR team is Benn Garnish, a top-level visual effects artist whose work is featured, among others, in the 2017 Wonder Woman blockbuster starring Gal Gadot. For Garnish, working on this innovative form of therapy is more valuable than any accolades in the entertainment world. “I joined Oxford VR due to the rare nature of being able to mix art and science with the extra benefit of actually making a difference in the world,” he said in the white paper.

Reaching Out to More Patients Than Ever

Gamified VR therapy is currently available in clinics. They receive a “plug-and-play” package consisting of hardware (VR headsets) and content. However, the Oxford VR team is working on ways to make this type of treatment mobile, available for patients at home.

These are possible thanks to the advancements in VR technology and the continually dropping prices of headsets. “If we really want to see transformative change in mental healthcare, we need to revolutionize how treatment is delivered and ensure adoption of innovative technologies which can address vast unmet needs. Automated VR therapy is an evidence-based treatment whose time has come,”  co-founder Perks explains in a press release shared with ARPost 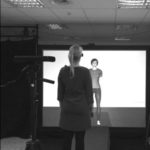 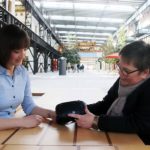