While building out development vehicles digitally and checking them in virtual reality isn’t new for automakers, the shelter-in-place situation across much of the country has made the technology all the more important. For Ford’s design leads, VR headsets are now an even more critical tool for ensuring the automaker’s development process keeps chugging along.

While building out development vehicles digitally and checking them in virtual reality isn’t new for automakers, the shelter-in-place situation across much of the country has made the technology all the more important. For Ford’s design leads, VR headsets are now an even more critical tool for ensuring the automaker’s development process keeps chugging along.

Those full-size clay models of vehicles under development are a physical representation of yet-to-be-produced cars, trucks and SUVs that designers and executives could walk up to and experience. 3D models and drawings are a good likeness of a vehicle but can’t replace the power of it in the real world taking up actual space. It’s the scale of the vehicle that makes clay models so important to the development process. Unfortunately, the coronavirus pandemic has put a halt on non-essential work and gatherings like standing around a sculpture. So the next best thing is going full VR.

Each member of the team gets their own avatar and although they look more like the sci-fi version of a robot butler from a 90s movie than the actual person beaming in from their home, it creates a collaborative situation. Inside the virtual meeting place, the participants can zoom in on details of the vehicle, point out issues, and share ideas with one another and the design team.

The designers take notes and can implement changes for later virtual sessions. It’s a long road of iterations and updates that needs some sort of 3D model to fully appreciate how tweaks affect the entire design. “We love big screens but you can’t get them big enough to show a full-size vehicle. Whereas, if you put in a VR headset you can experience that vehicle in full scale,” Ford digital design manager Michael Smith said.

In the future though, those changes could be made in real-time to the models. Computing and bandwidth limitations currently make that nearly impossible. Still, Smith is working at home researching how that would happen. “We’re getting there and we’re close to what would be considered a streaming experience. That one is still kind of in the testing phase,” he says.

Smith tells Car and Driver that Ford had seen VR from home as a someday solution, but not anything that would happen soon. Then work-from became the new normal and Smith and his team used the previous five years of experience using VR to fast track at-home setups to keep the trains moving.

In a video made by Ford to highlight its use of VR, Piaskowski said,“we really haven’t missed a beat. It’s just driving us into new ways of working in the situation that we’re in.” Remote working has pushed Ford and other automakers to rethink how they do business. Factory shutdowns may delay production, but the timetables for the development of new vehicles need to continue so that when this is all over, new and updated cars are ready to be presented to the public. Even if it means executives are standing in their homes miles away from each other with computers on their faces 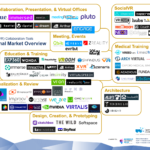 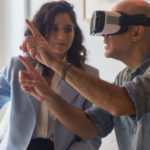