7 Ways VR Will Keep You Sane During Isolation

What would you do if you had something like the holodeck right now?

In the wake of the COVID-19 lockdowns many of us will discover new benefits of owning a VR headset.

Currently millions of people are dealing with the effects of isolation. Lack of human contact, general boredom and uncertainty are all threats to one’s sanity. Adding increased stress levels as well as a general state of uncertainty to the pot makes it clear — in times like these, we all should be proactive in protecting our mental health.

Similarly exposed to the mental health risks of isolation during their years of intergalactic travel, the crew of TV-series Star Trek used a room called the holodeck: a virtual reality system installed to help mitigate the psychological effects of isolation.

The holodeck could perfectly simulate any environment or situation and allowed the crew to experience things well beyond the physical limitations of their spaceship. It allowed them to relax in beautiful natural environments, play war games or explore Renaissance Italy — whatever they could come up with to make life on the ship more bearable.

To mitigate the adverse effects of physical or social isolation in places like psychiatric wards and prisons, researchers have successfully implemented cruder versions of the holodeck in the real world, in the form of consumer VR devices. Just like the holodeck, VR had therapeutic effects — providing a door to realities beyond isolation.

In recent years manufacturers like Google, Facebook and Sony have sold millions of commercial VR systems for home entertainment. Many of those facing isolation have access to VR at home and if you’re one of them, here are some reasons why you should try using it as one of your measures to protect and care for your own mental health.

Humans are social animals, we need contact with others to function. VR apps let users inhabit virtual characters and be together in virtual worlds. Unlike any other medium, the shared social presence achievable with VR technology feels magical and the feeling of human connection it can create is hard to describe. Mark Zuckerberg recently stated it will be “the most social platform yet”.

There are many ways one can be social in VR. Hang out in a private room with friends, travel around different worlds meeting strangers or attending large virtual events. This week a New York times reporter took up VR poker with friendly strangers as a way of coping with social distancing. Some of the most popular VR apps simply allow people to sit in the same room watching movies together.

Although in its early stages, socializing in VR does come with unexpected advantages. A recent viral video shows a kid discussing the therapeutic experience of embodying Kermit the Frog in the popular social VR app VRChat. The ability of being pseudo-anonymous and capable of assuming any identity or body, while still feeling the presence of people, opens up for lots of experimentation.

2. Somewhere else to go

Spending significant amounts of time isolated in the same room, apartment or ship with other people, there is an increased risk of conflict and tension. Sometimes we need a break from other people. Along these lines, Jennifer Fogarty, chief scientist at the NASA Human Research Program, recently touted that VR could be useful as a way of reducing the social pressures of isolation by providing a means to go away and take a time-out on your own.

To better cope with isolation there are many kinds of potentially therapeutic VR content to choose from. When faced with isolation, mental health experts advise using images of nature to offset the negative impact of prolonged time indoors.

Compared to looking at photos of nature, using VR as a nature surrogate is much more effective. VR apps let you immerse yourself in nature, creating an immense feeling of relaxation and calm.

I’ve found myself falling asleep in these types of apps several times. Usually VR relaxation apps also feature built in meditation exercises — a habit proven to improve mental health and resilience in and of itself.

Many people use VR to go to places they reach in real life — to bring back memories, to conquer fears or to gain new perspectives. What each person wants to experience will vary, but on days like these I’m partial to Google Earth.

The VR version of Google Maps — Google Earth provides a sense of scale, making the world feel really small and huge at the same time. For me it’s relaxing and encouraging to zoom in and out from space, being able to go and see places all over the world.

Just like the crew in Star Trek, everyone will have their own preference of content — what is therapeutic for one person could do nothing for the next.

Not only a step up from video conferencing in terms of creating human connections, VR is developing into a tool that can increase productivity in and of itself. Mike Abrash, chief scientist at Facebook Reality Labs, envisages that the “killer app” for VR will be a collaborative virtual workplace.

Facebook envisions a super productive office environment in VR — with virtual screens, whiteboards and holograms, capable of blending in important elements from the real world, such as your keyboard and coffee cup. Coworkers could come together from various remote locations to share a fully virtual workplace.

While the shared virtual work space can be expected sometime in the near future, many teams working from home should try the tools already available. Why not connect for a meeting in VR with your team once a week, just to get a taste of the future and experience the connection and closeness that only social VR can provide?

When isolated and confined to smaller spaces, it can be hard to find the motivation to stay active. Coincidentally, one of the most popular categories for VR apps is sport games.

When in isolation people report missing structure, social context and feeling of progress and personal development. Some may even be out of work or at risk of downsizing.

One way of understanding the allure of games is looking at how they provide joy and fulfillment through many of the same mechanisms as an ideal job or workplace would. A gamer develops skills and advances through a rewarding progression of tasks, building experience while staying optimally rewarded and motivated.

Games could be a way to reintroduce a sense of purpose and development while also serving as a fun and relaxing distraction. Many of VR games are very intuitive and easy to play, making them accessible to all.

Although still a long shot from the Holodeck, these are still the early days of VR technology (think personal computers in the 1980s), now is the time to experiment! 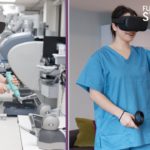 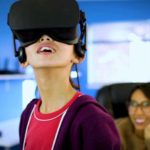