Virtual reality is emerging as a useful tool to bring about positive change for many, including the elderly. From reducing loneliness to transporting the infirm to far-flung places, without the need to travel, VR is enhancing the lives of senior citizens across the globe.

To mark National Senior Citizen’s Day, I’ve taken a look at some of the companies using the immersive power of virtual reality to make a difference.

Viarama is adding joy to the lives of senior citizens who are receiving end-of-life care. Using HTC Vive headsets and Google Earth VR, those in nursing homes or hospices are taken on journeys they never thought possible. The company is enabling the elderly to travel back to where they got married, or where they did their national service.

Billy Agnew, chief executive of Viarama said: “I was absolutely staggered by how much they enjoyed the experience, and how powerful it was for them. We’ve had mountain climbers climbing mountains, we’ve had artists with dementia who have had to give up their life’s work, and we let them draw, paint and sculpt in VR. The first time we worked in a hospice we had two doctors who were in to evaluate what we were doing, and both of the doctors broke down because it was so emotional.”

MyndVR is on a mission to improve the lives of senior residents and assisted living communities by introducing virtual reality solutions into outdated health-care practices.

The company is implementing this technology into 55+ living communities in order for seniors to experience the health benefits VR provides. This includes helping seniors cope with cognitive ailments such as Alzheimer’s and dementia, create meaningful experiences without leaving the comfort and safety of a living center, and importantly, provide a bit of fun.

MyndVR uses 360-degree cameras to capture experiences. For example, they’ve filmed a live band playing Frank Sinatra with the musicians and a crowd of actors dressed in 1950s clothing. The user experiences the music as if they were sitting in the front row and feels transported to another time.

The latest National Poll on Healthy Aging (February 2019) revealed that one in three elderly adults felt a lack of companionship, which suggests that millions of older adults across the U.S. feel lonely. Research shows that chronic loneliness can impact older adults’ memory, physical well-being, mental health, and life expectancy. In fact, some research suggests that chronic loneliness can shorten life expectancy as much as smoking.

More than 50% of senior living residents will experience depression or isolation during their stay. Rendever is attempting to overcome this social isolation via virtual reality and shared experiences. In the last three years, Rendever has installed its VR platform in over 100 senior living communities across the U.S. and Canada, providing more than 400,000 experiences.

The company is enabling care home residents to visit their childhood home, wedding venue or anywhere else from their past—a trip down memory lane aided by VR. It also gives residents the opportunity to feel like they have left the care home to visit places they’ve always dreamed of. The platform is used in group settings so residents can share stories and deepen their connections with one another and staff.

“I saw the negative effects of social isolation take a toll on my own grandmother as she dealt with the aging process. When I first saw seniors react to virtual reality, I knew there was something powerful to dive into, and have spent the last three years pouring my heart into a product that I know my grandmother would be proud of,” said Kyle Rand, Rendever CEO.

VR Genie is run by the nonprofit organization Equality Lab. The company’s mission is to “use cutting-edge technology to enable communities to thrive and to improve their quality of life.”

Users can choose to be transported to outer space, the ocean floor, or the tops of mountains, with the aim of combating loneliness, social isolation, and depression. Studies have shown that virtual reality can help people deal with a variety of mental health problems.

“We know that things like guided imagery and meditation can be very beneficial for cognition and things of that nature, and we also know that direct behavioral interventions can be very helpful for individuals as well,” said Aldrich Chan, a neuropsychologist and research associate at the University of Miami.

VR Genie’s aim is to grant the final wishes of elderly people, enabling them to tick experiences off their “bucket list” such as seeing the Northern Lights or visiting the Eiffel Tower. The experience has been hugely successful, with one older adult saying it “gave life to her soul” when she “visited” Cuba after decades of exile.

In the U.S., it is recommended that elderly adults get 150 minutes of exercise per week in order to enhance their overall quality of life and reduce the likelihood of accidents related to frailty.

Although exercise facilities are available in care homes, many seniors are unlikely to get their heart rate up to the levels required.

A study by Jon Ram Bruun-Pedersen of the Multisensory Experience Lab in the Department of Architecture, Design and Media Technology at Aalborg University Copenhagen used virtual reality to turn exercise into an immersive, exciting experience rather than a chore.

Bruun-Pedersen used virtual mountain landscapes with birds, plants, and trees to simulate being in the outdoors, which led to the elderly’s desire to use exercise bikes significantly increasing. After the study ended, the physical therapists involved in the study asked to use the experience in their training programs in the future.

Foto:Virtual reality has the power to give the elderly – (c) MYND VR 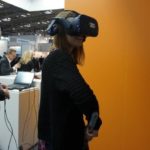