Veolia Water Technologies, a transnational water treatment specialist firm, is partnering with a company called Fieldbit to bring Augmented Reality to the plant floor. Don’t feel bad if your first reaction to that statement is „huh?“—ours was, too. If you’ve ever had to work on unfamiliar or semi-familiar physical equipment, though, it gets pretty interesting.

We spoke to Robert Kodweis, Fieldbit’s VP of operations, to get a better picture of what the company really does. Fieldbit is a software company, and its apps are relatively hardware-agnostic. Users can experience AR (Augmented Reality) marked-up views of equipment and spaces through smartglasses such as Realwear’s HMT-1, or by using an Android smartphone app to mark up video from the phone’s camera in real time—something like Pokémon Go for the industrial floor.

We pressed Kodweis pretty hard on the apparent AI aspects of the application. Since the press photos we saw mostly seemed to focus on tagging particular equipment with its own telemetry via AR, we wanted to know how the system was trained to reliably recognize individual machines without seeing identification plates and serial numbers. Kodweis explained that while this spatial computing is indeed possible, it’s not the big focus of Fieldbit’s collaboration with Veolia.

Instead, Fieldbit’s app provides remote workers with expert support in maintaining and repairing equipment on site. When a worker needs to perform an unfamiliar maintenance operation, he or she can open up the app and see if the operation is available in the company’s knowledge base. If so, the modern equivalent of Chilton or Haynes manual procedure outlines becomes available. If not, the field worker is connected with a remote support agent who can guide them directly through the procedure, seeing and marking up the camera images on the field worker’s device as they go.

Fieldbit’s application sounds much better than a Haynes manual, though. Once a procedure has been worked up and added to the Knowledge Base, field workers can access it by first selecting the pump or other machine by model, and then selecting the procedure—which could be replacing a filter, replacing an assembly, or any general repair item. In the future, field techs will be able to just aim their phone or glasses directly at the machine and have relevant KB procedures pop up automatically—but the company is still working on the AI image recognition for that aspect.

Once the worker selects a repair or maintenance procedure, the Fieldbit app walks them through it step by step. At each step of the procedure, the app highlights the appropriate parts—for example, bolts which should be loosened can be circled in red—on the actual video of the machine, as seen on the field worker’s phone or headset in real time.

A Fieldbit sales engineer created this short demo video for us, in which the user is guided through a simple connectivity check-and-restoration procedure on an Andium cellular gateway device. Note the augmented reality aspect—the actual LEDs, buttons, wires and antennas are overlaid automatically and in real time as the user’s phone pans across them, during each of the procedure’s five steps. 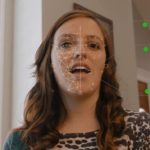