While use cases for consumer XR outside of entertainment and marketing have been slow to develop, enterprises around the world are rushing to yield the benefits of its current killer app: simulation and training. Last month we wrote about how Raymond, a Honda subsidiary, created a VR training system for its forklifts, which is a terrific illustration of a real use case by an industry rarely thought of as high tech. Hardware maker RealWear’s industrial microdisplays for work instructions and remote experts have seen 1000% year over year growth.

Sixense, which has provided XR training solutions in industries like Automotive (spray painting and powder coating), Construction (welding), and Healthcare (rehabilitation), recently hired HTC Studios head Joel Breton as President to direct the execution of enterprise VR applications, and manage the growth of the company’s service business. In addition to its custom solutions, Sixense now has an SDK (software development kit) which allows other developers to use the simulation technology the company developed in their own products.

Amir Rubin and Avi Arad co-founded Sixense in 2007 with an aim to improve lives using immersive computing. Just two years later they presented wireless motion-tracked controller prototypes to former Oculus honcho John Carmack at the 2009 Quakecon. He praised the small startup for creating what the Nintendo Wiimote wished it was: a full 6DOF controller.

When the second coming of XR began around 2012 with the first Oculus Rift, the Sixense team had already been working with immersive computing for over five years. While many XR startups today are building applications for enterprise, few can claim to have been working in the enterprise XR space for over a decade. “We have a longer history than almost anyone in VR, and we’ve been waiting for it to hit an inflection point. For enterprises, that moment is here, and we expect massive growth over the next several years as a result,” Rubin told me when we met at VRX’s Enterprise conference in Boston in May.

Diving deeper into enterprise use cases, two of Sixense’s partners in 2018 launched VR skills training applications using the Sixense SDK. The first is SimSpray from VRSim for training spray painting and coating. SimSpray simulates the painting of cars. It is currently being used by companies like Honda to train their workers. The second application is the VRTEX 360 System, a welding training application from Lincoln Electric.

The VRTEX 360 System’s simulation of welding is amazing. Users wear a headset designed to feel like a real welding helmet and wield an exact replica, weight and all, of the real thing. The spray painting training application SimSpray is similar in its reproduction of real world tools, as the controller models a real paint gun.

Though Sixense has their sights set on enterprise, they haven’t left the world of entertainment behind entirely. In a partnership with casino gaming machine manufacturer IGT, they launched Siege VR in 2018, a competitive multiplayer archery game, debuted in IGT’s Virtual Zone at Boyd Gaming’s Orleans Hotel and Casino in Las Vegas. The Virtual Zone operates using the Sixense Tournament Platform, Sixense’s multiplayer LBVR (location-based VR) solution.

We recently spoke with Joel Breton, the new President of Sixsense and their content studio head. Breton held a similar post at Vive Studios, the headset makers’ content arm. We asked him about his transition from games to enterprise, which Breton says began during his time at Vive. “With the development skills I used to create engaging games, I aim to create fun, engaging enterprise applications that will not only be more useful and effective in their use-cases, but also change people’s lives for the better. From years of creating gamification mechanics, we have learned that training people with an extra order of fun baked into the application will achieve better results for both trainee and the company. If we do our job right, companies will be able to train employees better and faster.”

Breton’s former colleagues at HTC just created a full-service enterprise VR division, whose mission is much broader than selling headsets. To yield the full value of its position in the VR field, the company is focusing on the development of the enterprise solution itself – moving from hardware to content. Breton says it’s a smart move. “We are all fishing off the enterprise pier because that’s where the fish are,” he said.

While AR for mobile and for enterprise has gotten the lion’s share of attention this year, VR continues to surge as a tool for enterprise training and simulation whose users include everyone from Amazon to Wal-Mart using. Now Deutsche Bahn doesn’t have to use rolling stock to train technicians and engineers, and warehouses can train forklift drivers more safely, cheaply, and effectively with VR. ARtillery Intelligence, an XR consultancy, projects enterprise XR (AR + VR) will grow 51.9% year over year in 2019, then ramp up to 242% in 2020, which would represent definitive inflection point. 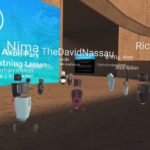 The future of immersive education will be live, social, and personalized 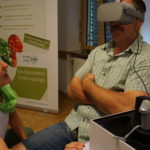