A group of students have used ‚cutting-edge‘ technology to create a virtual reality tour of their college’s new building design.

The youngsters studying architecture, interior and product design teamed up with the firm ISG which is redesigning Barking and Dagenham College’s existing facilities as it prepares to open an Institute of Technology (IoT).

In April, the government named the college one of 12 colleges and universities nationally to have scooped funding to open an IoT.

It is scheduled to throw open its doors this autumn and will train people in subjects including: construction and infrastructure, engineering and robotics; data; TV and film production.

ISG is credited with being one of the pioneers of VR use in architecture and interior design projects so the college asked for help creating a task for students to create a virtual reality sneak preview tour of the yet-to-be-completed IoT.

Lecturer Bella Parenti said: „We are a forward thinking department and know that it is only a matter of time before other design industries will use this technology; therefore we took the initiative to embed it into this project.“

They then took a room each and developed designs using 3D computer modelling.

The final video was played on VR headsets to some of the college’s managers and ISG’s Dominic Camilleri.

Dominic said: „It was a pleasure to be invited to the students‘ demonstration and experience the tour and their presentation to a live audience, in which they expressed themselves eloquently.

„Working with our team’s within ISG I am well aware of the considerable effort, time and skill involved, often taking weeks of work and teams of resources to complete.

„To see what these wonderful students have achieved with limited time and resource available to them is a true testament to their abilities and the teaching staff at the college.“

He added the project will provide the students with a great insight into the ever-changing demands of the construction industry and could provide exciting career opportunities.

Members of the public can take the virtual tour by attending the college’s next open day on Thursday, June 20, from 4pm to 7pm at its Rush Green Campus in Dagenham Road.

A still from the students‘ virtual reality tour of Barking and Dagenham College’s Institute of Technology. Picture: B&D College 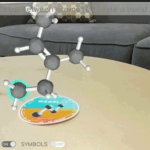 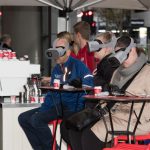