According to the researchers, the average score on the pre-test was around 36 percent in all three conditions, with no significant differences between conditions. And the average score on the post-test was about 58 percent across the board, with no significant differences between the modes of learning. The students learned equally well with all three modes.

After they were finished with their activities, participants were shown the other two forms of learning. More than three-quarters of the students (78 percent) said that they would prefer the VR activity over the other choices. Their reasoning: In general, by allowing users to easily change the environment on their own, VR provided a „full picture,“ which helped them build their „mental model.“ Among those who didn’t prefer VR, the overall sense was that they were uncomfortable or distracted „with the overwhelming sensory input,“ including the use of the controls.

„The similarity in learning outcome is particularly interesting, given that the VR participants had to learn how to use new technology at the same time they were learning the moon phases,“ said lead author Jack Madden, a doctoral candidate in the field of astronomy, in an article about the project. „What would the outcome have been if they’d already been familiar with using VR to learn?“

According to fellow contributor Swati Pandita, a Ph.D. student in the Virtual Embodiment Lab, future research will explore how the use of avatars influences learning outcomes. „Several participants mentioned feeling nervous because they didn’t have a body and remarked, ‚There’s no space suit so how can I breathe?'“ she explained. „The lack of a virtual body may have affected their willingness to explore the environment freely. We want to see if people will feel more encouraged to move around and engage more with the environment if they have an avatar.“ 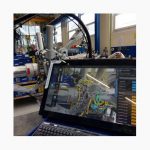 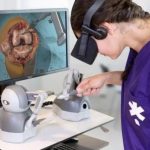