Experience with CAD not required.

There are a lot of steps involved when it comes to designing a car. It first starts with a simple sketch or a series of sketches that will go through a series of changes until engineering needs are met. Then, 2D renderings become 3D models, more tweaks and changes are made, and additional 3D models are developed until an actual drivable prototype is built. And even after that all, there are more steps involved until a sketch becomes an actual car that you can buy. The entire process can take at least 3 years from start to finish.

Oh, and you’ll need to know CAD which can take about six months to get up to speed and twelve months to master.

To help accelerate the process, Ford Motor Company is exploring the possibility of using VR to design cars through Gravity Sketch, a VR tool that lets designers sketch directly in a 3D VR environment, skipping the 2D process all-together, and speeding up the design process in the process. What normally takes weeks is reduced down to mere hours, and you can do it with little to no CAD training at all.

Autoblog.com’s Zac Palmer said, “We aren’t professional car designers ourselves, but using the tool was undeniably cool and easy,” adding “I was able to pick up a lot of the basic in a short 20-minute learning session.”

Gravity Sketch resembles Google’s Tilt Brush VR drawing tool. Both tools let you draw in a fully immersed digital environment with controllers used to create lines, access pre-made shapes, pull up different design tools, such as brushes, and change colors using your virtual pallet. However, instead of using keyboard commands, your entire body is involved in the process and you’re designing in a way that feels much more natural.

Gravity Sketch differs from Tilt Brush, however, in that the application is designed specifically for collaboration, designing and developing ideas directly in VR – offering a more powerful design tool for real-time creation and manipulation of complex 3D shape that gives car designers and engineers the ability to better conceptualize a design from the very start.

Ford designers would wear a VR headset and, using the controllers, sketch out their idea in an environment that would give them the ability to make adjustments, pick up pieces of the car, and view them from any angle; they could even use VR to get an idea of what it might be like to sit behind the wheel while cruising down the West Coast on scenic Route 101.

From an official Ford press release, Michael Smith, Ford design manager said, “Jumping right into 3D gives us a 360-degree view of a vehicle as it is being created,” giving their designers the ability to explore creativity and approach car design with a more human-centric approach.

Currently, dozens of Ford interior and exterior designers are using Gravity Sketch at five of its global design studios with the expectation that designers will be able to use VR to review more models in the 3D environment in hopes of designing the best possible vehicles for their customers.

“Designers love to noodle, play, delete and start over,” said Smith, “VR is fun for that. It lets you try an idea and if you don’t like it, you can throw it over your shoulder, start over.”

Since Gravity Sketch lets the designer work at a 1/1 level, Ford designers can actually design at human scale, which allows them to get into the virtual shoes of their customers for a better design.

It’s not just about how you fit into the vehicle, it’s also about how the vehicle interfaces with the environment, which is important for Ford.

Now with Ford using Gravity Sketch to design cars in VR, it proves that the auto industry is still reinventing itself through VR and AR experiences. 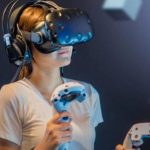 VR Is Going To Take eLearning In 2019 By Storm 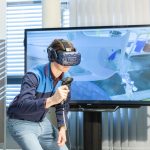