And it’s more motivating than a trainer

Games like Beat Saber and Creed: Rise to Glory are a great way to get your heart pumping while having a blast, and after having played a number of these types of games at a near constant since they came to VR headsets, I thought I was in decent enough shape to take on NordicTrack’s upcoming consumer exercise bike with VR headset integration. I haven’t been to the gym in forever, but now I’m definitely rethinking that (in)decision.

Most importantly, the NordicTrack VR Bike comes with a Vive Focus and a number of gamified workouts designed to motivate you. One such title demoing today at CES was Aeronauts, a game that tosses you into a steampunk pedal-powered glider flying through a twisting canyon.

The objective is to go fast as possible, navigate through the ring checkpoints, and shoot down balloon targets by locking on with your gaze. It’s a pretty basic formula, but I have to admit it’s not only a visually polished game, but also engaging enough to take my mind off my rapidly declining ability to peddle. It worked surprisingly well. I wanted to keep pushing onward in the same way any decent racing simulator demands; it totally hooked into my innate sense of competition and not wanting to let the computer beat me.

By the time I got out of the three-minute race (just three minutes!), I was basically in shambles. I sucked down a bottle of water and carried on what I thought from the outside looked like a reasonable conversation about when the bike will land on consumer doorsteps, but I was actually dying inside (more so than usual).

If I had to describe my body type, it would say I’m deceptively skinny-fat. I haven’t jogged or lifted my dusty kettlebell in longer than I care to admit. I do play fitness-focused VR games on the regular though, and get my heart rate up into my Fitbit’s fabled ‘cardio zone’ from time to time, so I’m not a total slouch. After sweating it out on the bike, it’s clear to me now the missing key to a truly tiring VR workout is resistance with a capital ‘R’, the sort of variable push-back at-home gym equipment like the NordicTrack VR Bike aims to provide. I pushed through it the same way I would any game. I didn’t want to lose, and I desperately wanted to see that high score at the end. I’ve seen similar VR exercise bikes come and go in the 2+ years since consumer VR launched, but nothing ostensibly providing the level of immersion and polish that NordicTrack and Vive Focus do here.

Oh, here’s my Fitbit data from today. Guess when I demoed Aeronauts.

The full NordicTrack VR Bike package is slated to arrive in Summer 2019 at the $2,000 mark, including a Vive Focus outfitted with a number of purpose-built exercise games, and also a one-year membership to iFit, an online workout regime led by personal trainers and the company’s tech that automatically adjusts the bike’s incline, decline and resistance in response to personal trainer commands. iFit also streams what the company says will be “thousands of personal trainer-led workouts shot in studio or on location in beautiful settings all over the world.”

iFit isn’t likely to be VR-specific though, instead providing the training material via standard format videos rendered on the headset. We’ve reached out to NordicTrack to clarify this, and will update when we hear back.

That’s one of the most expensive VR ‘controllers’ I’ve heard of to date, but in the grand scheme of things it fits pretty much in line with the company’s other at-home exercise equipment, which generally touted for its high quality, and isn’t out of place with the growing trend of high-end, high-tech at-home exercise equipment like Peloton. The Vive Focus headset itself costs $600, and a one-year membership to iFit costs around $400, making the bike itself effectively a few dollars over $1,000.

The real clincher here is whether the company can provide enough engaging content like I saw today with Aeronauts. If so, they might just tap into a market of VR-curious users looking for a trusted name brand in exercise equipment to shoe them in. 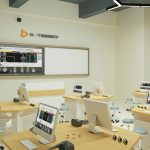 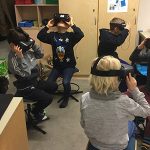