UPS is going all-in on VR, and it’s picked the HTC Vive as its platform of choice Being a delivery driver might not seem like a particularly exciting gig, but hauling packages for a company like UPS requires lots and lots of training. UPS drivers are highly trained, and the company maintains nine different training centers dedicated to ensuring its delivery crews are masters of their craft. Now, the company is embracing the virtual reality revolution, and it will be using HTC’s Vive headset to put its trainees in virtual UPS trucks to identify and manage real-world challenges in the comfort of a computer lab.

The VR training grounds are just as hazardous as the real city streets that the trainee drivers will need to navigate on a daily basis. Various pitfalls await the students in the specially-designed simulation, including various traffic snags and unpredictable events.

“Virtual Reality offers a big technological leap in the realm of driver safety training,” UPS chief information and engineering officer Juan Perez says. “VR creates a hyper-realistic streetscape that will dazzle even the youngest of our drivers whose previous exposure to the technology was through video games.”

HTC is predictably upbeat on the world’s most recognizable delivery company adopting its virtual reality hardware for its training program. The Vive has steadily outpaced the Oculus Rift in both consumer mindshare and the amount of polished content available for the platforms. For enterprise applications like UPS’s new training program, companies have tended to lean towards the Vive as well, likely due to the greater number of developers who are already familiar with it.

Quelle: UPS is going all-in on VR, and it’s picked the HTC Vive as its platform of choice – BGR 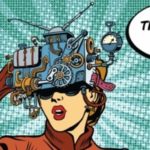 We’re in a NMC State of Mind: Immersive Learning and the Future of Education

How AR and remote video could assist...

Automotive & AR: Where Are the Benefits?