DPVR, a Shanghai-based company specializing in virtual reality (VR) device design and manufacturing, has recently announced a partnership with Travel Africa Network (TAN), a South African international satellite travel TV channel. As part of the partnership, DPVR will serve as a VR technology provider to offer its customized VR hardware and software services to TAN.

TAN provides tourism multi-media services dedicated to promoting African travel experiences to the world. The network became the first African travel channel to broadcast its dedicated travel content to 135 million homes and luxury hotels in Europe, the Middle East and North Africa on EUTELSAT’s HOTBIRD 13° East, which forms one of the largest satellite broadcasting systems in the EMEA region.

TAN recently released a tourism business project called ‘TribeVR’. The project establishes a B2B tourism community and intends to foster relationships between all stakeholders in the tourism supply chain. Through TribeVR, African suppliers such as hotels, tour operators, and sightseeing companies can showcase their products, hotel lodges, and destinations. Users are then able to explore these via immersive experiences using VR headsets that show them interactive product images or videos.

DPVR is currently the only VR hardware provider for TAN and the company provides a series of customization services as part of the partnership. These services include the customization of the VR headset’s appearance and adapting software in order to better help TAN to promote its brand awareness and provide a better user experience.

DPVR added that TAN is incorporating various technologies such as virtual reality and augmented reality (AR) to provide more unique interactive experiences that drive consumer engagement both regionally and internationally.

Derek Liu, VP of DPVR, said: “Our partnership with Travel Africa Network is extremely important to us as this project helps people from all over the world to better understand and learn about the experiences that Africa has to offer. At the same time, it can also contribute to the economic development of the continent by helping TAN to boost tourism opportunities.”

For more information on DPVR and its virtual reality hardware and software solutions for businesses, please visit the company’s website. 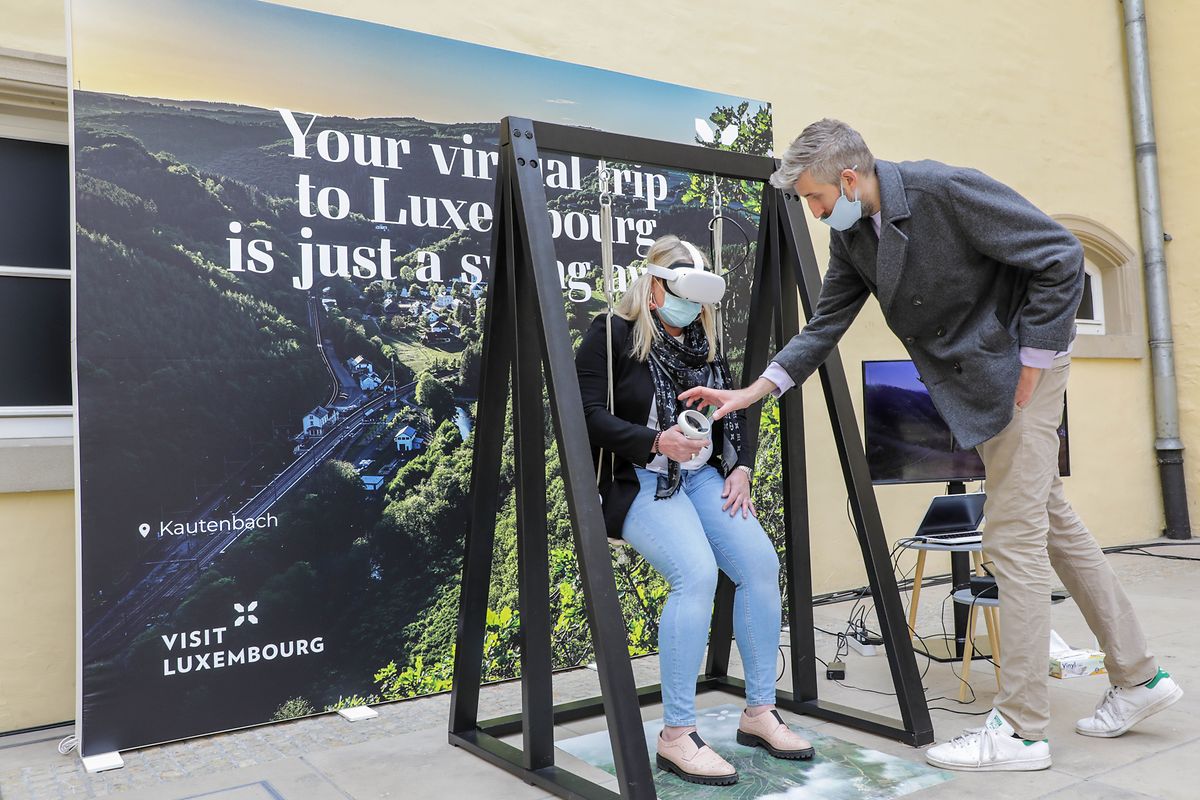 How VR Technology Can Revive The Tourism Industry

What is Virtual Tourism and how is it backing the Tourism Sector?

The global tourism and hospitality industry is severely affected by the ongoing coronavirus pandemic. A pandemic impacts the tourism industry the most as it involves traveling of people from one place to another. History has witnessed that epidemics and pandemics have an immediate impact on the hotels and restaurants, airlines industries, travel agencies, etc., due to the international travel restrictions, media coverage and government measures.

World Bank shows that the cost to the global economy of SARS is projected to have been US$54 billion. At the same time, the organisation foresees that a ‘severe flu pandemic’ could cost more than US$3 trillion, roughly 5% of global GDP.

Coronavirus outbreak has devastated in such a way that the travel and tourism sectors cannot expect to resume to pre-pandemic levels until 2024. How can the industry cope up with these damages?

Well, with the latest advanced technologies like virtual reality (VR) technology, airlines, travel agencies, and tourism boards can attract and engage prospective customers. “VR is going to change the way both many of the things we do today and some new and important areas are transformed like tourism,” opines Shaun Collins, CEO of CCS Insight.

Virtual reality immerses users in a computer-generated and interactive 3D environment. It may involve use of various props. Users may be needed to wear gloves and there may be other sensations like movement (i.e. in a rollercoaster simulator), feeling (i.e. if the user is sprayed with water) and smell. In other words, VR emulates the physical world by escalating one or more of users’ senses and tricking the brain into feeling like it’s right there in the virtual world. It could act like augmented reality and 360-degree photography to give a taste of virtual tourism. Several examples listed below prove that companies have already technology like VR to offer virtual tours to users as well as to revive the travel and tourism industry.

• Berlin-based io, for example, is a startup which has developed a platform to transport people to historical sites around the globe through VR explorable in photorealistic quality.

• Another startup is Jaunt VR that produces 360-degree films, shows, documentaries, tours on their app all in VR. Users can pick any one among 20 different channels. If a user picks among the Redwood National Park, San Francisco Giants, it will unveil the secrets of Machu Picchu.

• YouVisit, founded in 2009, is an online virtual tourism platform that allows travel companies to make and share 360-degree photos and VR tours with 1000+ pieces of interactive VR experiences.

• Ascape is another VR application for travel which reduces your work by sorting out contents for you. Countries such as Australia and North Korea organise contests, activities (Rio Carnival), spiritual journeys, underwater shoots, guided tours, and also from tourism giants like Thomas Cook, JetBlue etc.

It’s unlikely that most of the companies pushing through virtual reality tourist experiences intend to replace physical tourism. For the most cases, VR tourism will be harnessed as yet another digital marketing device.

One the other hand, as the world realises the potential of VR and its varied applications in different industries, including travel, retail, and automotive, India is also witnessing a similar trend. Although VR was relegated for only a gaming greek, it is now gradually ending up with the tourism sector, explicitly experimenting and testing out its fascinating potential.

India in 2017 generated US$210 billion in revenue from the tourism sector that accounted for 9.5% of India’s GDP. Today there is a mindset shift during COVID-19 circumstances. India is also improving its travel scenario beyond just recreation to make it a lifestyle choice.

VirtualDIVER Takes You Underwater In VR In Santorini

VirtualDIVER for Santorini is the first real-life integrated and interactive virtual experience platform in the world, that takes tourists on a tour in Santorini, both above and below the sea.

Through VirtualDIVER, users who own 3D special glasses or other devices with virtual reality or augmented reality capabilities, will have the opportunity to “travel” in the terrestrial and underwater environment of the island of Santorini, from the comfort of their home.

The virtual trip starts from the central square of Fira, the capital of Santorini, where users are able to stroll around the island and interact with the platform by doing various activities.

Then, they can descend from the mountains of Santorini by using the island’s cable cars – just like they would do in real life – and prepare for an unprecedented diving experience.

With the ability to choose from a number of diving locations, such as Caldera and Nea Kameni, virtual divers will be able to explore the real-life treasures that are hidden below Santorini’s waters, such as craters, shipwrecks, volcanos and colourful marine life.

Additionally, the platform includes numerous touristic points within its virtual map, where users can pause their tour, click on various objects, buildings and locations and find out more information about the history of the island.

Even though in 2020, numerous online platforms for virtual reality tours emerged, VirtualDIVER is a project that has already been under development for the past two years.

The 15-member team of creators of VirtualDIVER includes scientists, geologists, geographers, computer engineers and programmers from the Department of Geology and Geo-environment of the University of Athens, the National Technical University of Athens (Remote Sensing Laboratory), as well as the companies TETRAGON (from Thessaloniki), STEFICON and up2metric (from Athens).

The idea of creating this digital platform was firstly conceived by Evi Nomikos, a Santorini geologist and associate professor of Physical Geography and Oceanography at the University of Athens, who saw a huge opportunity in creating a virtual underwater tour, in an open-world realistic environment, where users could be the deciders of their own personal diving journey.

The virtual map on the platform, both on the island and below the sea, is an exact adaption of reality, with even the smallest details being loyal to the island’s architecture and scenery.

Ms. Nomikos brought the University of Athens in contact with the three Greek companies, that specialize in computer programming, engineering and design, and sent them an open invitation to create the platform, as part of the university’s Research and Innovate Program.

“I was born and raised in Thira, Santorini, and so I thought that the island would be the best choice, as a VR object, for the development of an integrated interactive platform, with terrestrial and underwater experiences for tourist and cultural institutions,” Ms. Nomikos explained.

“Hardly any other place in the world can offer you the charm of standing 350 meters above the water, at the edge of a volcano, and knowing that at another 350 meters below the water is the miracle creation of that volcano that erupted thousands of years ago. Santorini is not only of geological interest, but it is also full of magical places, both on land and at sea, that make digital travel fascinating,” she added.

At the conference of the International Geosciences Association (EGU) in Vienna, Austria, which was held in April 2019, Ms. Nomikos and her team, presented for the first time the idea and first blueprints of VirtualDIVER to a large audience. The state-of-art technology of the project, which largely gathered the admiration and interest of fellow geologists and international investors, received overwhelming response and feedback.

“Our goal was to develop a comprehensive interactive platform, in order to enrich the travel experience for those who are unable to visit the island, and promote special forms of tourism for our country,” Ms. Nomikos described.

“VirtualDIVER allows the user to move in a physical environment, with augmented and virtual reality techniques, and walk around areas of tourist and environmental interest.

“The platform moreover includes everything you would normally see in Santorini, such points with unique geomorphological structures, shipwrecks, sunken ports, water parks and NATURA areas.”

“The detailed mapping of the marine and terrestrial relief in high resolution was carried out with multi-link mapping systems, underwater vehicles and drones, in order to create a single topographic relief and to analyse all its special morphological and ecological structures, as well as its human structures and creations,” the VirtualDIVER team noted.

Besides the entertainment factor of the VR experience, the platform includes numerous interactive videos, where users can see digital representations of events that occurred in the island many centuries ago, such as the terrible eruption of the volcano, which changed the shape of the entire island and created a large tsunami that even reached the island of Crete.

The research project of VirtualDIVER was funded with 730,000€ by EPANEK – ESPA (Operational Program of Competitiveness, Entrepreneurship and Innovation of Greece) and it is projected to be ready in October 2021.