Immersive VR Film Takes You On A Supersonic Jet Ride

Emmy award-winning immersive production studio Felix & Paul Studios, the team behind the hit VR series Space Explorers: An ISS Experience, is back with yet another jaw-dropping 360-degree experience for Meta Quest VR headsets.

Available now via the Meta Quest TV app, Supersonic Flight – Space Explorers: Special Feature puts you in the cockpit of a T-38 supersonic jet, the same aircraft used by NASA to train astronauts for spaceflight. The roughly nine-minute 3D 360-degree video takes you through a variety of scenic locations—from a sprawling canyon to a snowy mountain range—at ridiculously high speeds.

“For the past 60 years, NASA astronauts have trained for spaceflight flying T-38 supersonic jets,” states the official description. “Now is your chance to jump on board and fly faster than the speed of sound!”

Similar to the Space Explorers series, Supersonic Flight makes excellent use of 360-degree camera technology to immerse you in a one-of-a-kind experience that would normally be out of reach for the general public. 3D brings the cockpit and its array of controls to life, further absorbing you in the virtual flight.

That said, this experience may not be for everyone. The high-altitude joyride features several moments that could prove jarring to those prone to motion sickness. If you are able to stomach the ride, however, you’re in for a serious treat. Felix & Paul Studios is responsible for some of the most visually-stunning 360-degree films available on VR headsets, and Supersonic Flight is no exception.

Most recently, the studio partnered with NASA to host an immersive VR live stream of the highly-anticipated Artemis 1 rocket launch this month. Supersonic Flight is just the latest in a series of exciting partnerships with the American space agency. 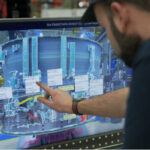 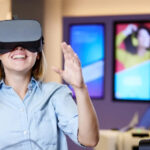