Virtual reality training to launch for health care workers in BC

SFU professor at the School of Interactive Arts and Technology (SIAT) Dr. Steve DiPaola is leading an international team of computer scientists, artists, and cognitive scientists to create a COVID-19 Virtual Reality Training program. The project utilizes virtual reality (VR) programs as well as artificial intelligence (AI) to train nurses during the pandemic.

In an interview with The Peak Dr. DiPaola, who oversees SIAT’s iVizlab, noted that this is because nursing “practicums have been held up” or cancelled due to COVID-19. He is currently leading a team to use “AI for social good” so nurses can complete their virtual educations in an immersive environment.

Nursing relies on human interaction for quality of care — by allowing nurses to interact with characters in VR, they are able to learn the skills they need without putting themselves or patients at risk, according to Dr. DiPaola. This training will use “virtual characters [that] have their own brains” and “are fully embodied with gesture and facial animation.”

Dr. DiPaola explained that they are aiming for a sense of realism in the way the VR characters move their bodies and faces. This is a challenging aspect of a virtual nursing practicum because through VR, the professor and nurse could have a difficult time discerning whether students are interacting with patients correctly. He expanded on this by comparing the way a professional nurse and a learning nurse might wash a patient’s face differently, despite both being successful movements. However, some learning nurses might wash a face differently than a professional, but with unsuccessful movements. The team is working to plot all the ranges of movement in a variety of settings within unofficial categories of unsuccessful and successful procedures —  allowing nurses to see if their students are moving correctly within a VR.

Most AI systems that the public interacts with — such as Apple’s Siri and Amazon’s Alexa —  are designed to register simple question and answer pairings. Dr. DiPaola noted that those systems “[don’t] have a lot of memory or personality” and iVizLab aims to build more of an “empathy-based personality engine.” Empathy in AI is a “technology that is new” to the field, according to Dr. DiPaola.

Dr. DiPaola recognized that in British Columbia, they are pending approval to have VR healthcare training recognized in an education setting. He noted that their branch in Australia has received approval and is expected to begin their training with personal protective equipment by the end of the month. Pending approval in British Columbia, Dr. DiPaola said that they are “trying to be worldwide leaders in how [VR healthcare training] might happen.”

Virtual reality training to launch for health care workers in BC 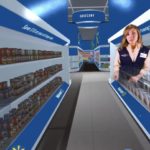 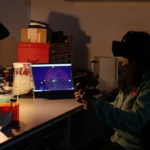