One of Oculus Quest 2’s headlines is its price tag. At $299 with a spec sheet that makes it the new standalone VR standard, the quality/price ratio is almost too good to be true. This comes after rumors of either a “pro” or a “lite” Quest. We ended up with the former at the price of the latter.

It’s been said, but we rarely see that combination, especially with this extent of movement on both spec bumps and price drop. Among other things, Quest 2 has 50 percent greater resolution, expandability to 90Hz, and a $100 (25 percent) price drop for the entry-level 64GB unit.

Circling back to the “too good to be true part,” this is part of Facebook’s loss-leader approach for VR. It wants to seed a network effect by stimulating usage, which in turn boosts developer incentive. It’s trading margins for market share to jumpstart a platform with longer-term payoffs.

“That’s the shocker,” said Tested’s always-insightful Norman Chan, “Quest 2 is not going to be more expensive than Quest 1. [It’s] launching at $300 — a whole $100 less than Quest 1 […] Facebook must be taking a huge loss with this because it’s aggressive, aggressive pricing.”

The question is how Facebook landed on $299 for the entry-level unit and $399 for the 256 GB unit. This walks a fine line between striking demand-stimulating goals outlined above, and offsetting per-unit costs — at least on a cost-of-goods basis (R&D overhead is a different story).

Putting costs aside and isolating strategic pricing to maximize demand, $299 is a market-validated price point. For example, if we compare its consideration cycle to that of a gaming console, the market has validated a $299 price point. See: entry-levels PS4, Xbox 360 and Nintendo Switch.

Admittedly, comparing a VR headset to traditional gaming consoles isn’t exactly apples-to-apples, but it’s an adjacent product class as a proxy for Quest 2’s demand signals. Of course, in any apples-to-apples comparisons to other VR headsets, Quest 2 has undercut them significantly.

Lastly, we can see how $299 and $399 stack up to consumer sentiments in our VR survey with Thrive Analytics. If we look at the segment of current VR users, 63 percent would pay either price point for a VR headset. Price sensitivity is not-surprisingly a bit higher among non-users.

Another notable point about Quest’s positioning is how its advanced spec sheet will signal value in future-proofing. In other words, the value out of the box is immediately clear… but sizable spec bumps also mean that the device will have a longer shelf life and replacement cycle.

Possibly counteracting that is the message sent from Quest 2’s launch timing that makes the 13-month old Quest 1 outdated. Has that eroded trust among Quest owners that bought it recently? Or are Quest 2’s attractiveness and future-proofing strong enough to overshadow that?

Speaking of future-proofing, Facebook has cleverly priced Quest 2’s device tiers. The entry-level unit is attractive for all the reasons noted. But $100 more gets you 4x the storage — a much greater dollar-per-byte upgrade than traditionally seen in computing hardware tiers.

This is classic behavioral economics, and will appeal to heavy VR users or anyone inclined to future-proof their purchase. The other “evil genius” in this move is that 256 GB makes it easier to buy more games — an anticipated revenue center as the installed base and apps-per-user grow. 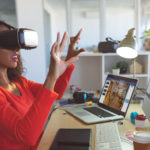 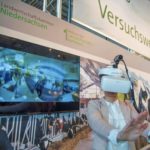 The VR revolution has been 5 minutes...