Cooking Simulator VR Lets You Cut Onions Without The Tears

How has it taken this long to get a VR game called Cooking Simulator VR? At least this take from GameBoom VR looks like it will live up to the title.

Coming later this year to PC VR headsets, Cooking Simulator VR is a port of the 2019 Cooking Simulator from Big Cheese Studio. The game transfers the original PC gameplay over to position-tracked VR controllers for more realistic control in the kitchen. Think Overcooked but with a little more finesse, though the same potential for utter chaos, should you desire it.

Check out the trailer above; as someone that struggles to chop an onion without either crying and/or cutting himself, this looks like a safer way for me to learn some culinary skills. Plus you can set fire to boxes and cook fish on them without trying to get away with insurance fraud afterward.

But Cooking Simulator VR isn’t just a slapstick playground; on top of a sandbox mode there’s also a career option, and the game features over 140 ingredients to help cook up over 80 recipes. As you play you can unlock new perks and skills by leveling up, too.

GameBoom itself is behind the VR version of Thief Simulator, too, and it’s also working on a VR version of Prison Simulator. These are all titles published by PlayWay, which also has other simulation titles like Tank Mechanic Simulator and, uh, Drug Dealer Simulator. We can only hope there’s a VR future for that one, I guess.

For now, Cooking Simulator VR will arrive in Q4 of 2020 on SteamVR. No word on possible Oculus Quest and PSVR ports, but we’d welcome them with open arms.

Cooking Simulator VR Lets You Cut Onions Without The Tears 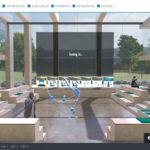