You can operate your PC in VR with nothing but your bare hands in the open air while wearing an Oculus Quest headset.

Hand tracking support rolled out recently in the latest update to Guy Godin’s Virtual Desktop app. The feature turns what’s already an enormously powerful VR-based utility into an even more flexible tool. While Oculus Quest hand tracking still features major limitations, the freedom to be able to log onto your PC from anywhere with Quest on a Wi-Fi connection without even controllers required means that you can do things like stream movies to your headset from your PC without first ensuring that your Oculus Touch controllers are present and have charged batteries.

The app essentially brings some direct control of your 2D desktop via Quest’s hand tracking and even extends some of that control to PC-based VR games through an experimental feature that emulates Touch controllers.

For those looking for even more flexibility in their VR setup — and willing to deal with whatever performance issues come with streaming PC VR over a shared Wi-Fi network — people who sideloaded a patch for Virtual Desktop can even use an experimental feature that emulates their hands as Oculus Touch controllers for PC VR games.

The feature works by natively emulating your hands as Oculus Touch controllers and mapping gestures like flinching the index finger like a finger gun to the trigger on the emulated controllers.

Using this experimental feature I was able to complete an easy difficulty Beat Saber song in the PC VR version of the game on a wireless Oculus Quest. The PC was wired to an 802.11ac router and I was just about six feet from the router in my Quest. I played as if I was Edward Scissorhands, simply swinging my arms through the air with no controllers in my grip. To be clear, it wasn’t a great or even a good experience — but it was remarkable that it worked at all.

Godin continues to update Virtual Desktop ($19.99 on the Oculus Quest store) with new features and optimizations on a regular basis and he plans to keep working on the hand tracking feature, so we’ll keep updating you as the app changes. 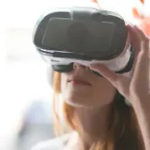 PwC’s study into the effectiveness of VR training 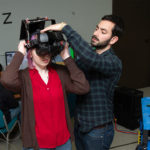