Witness 500 Years Of Cosmic Evolution Thanks To NASA

Combining data from Chandra and other telescopes with supercomputer simulations and virtual reality, a new visualization allows users to experience 500 years of cosmic evolution around the Milky Way’s supermassive black hole called Sgr A*. Each color represents different phenomena including Wolf-Rayet stars (white), their orbits (grey), and hot gas due to the supersonic wind collisions observed by Chandra (blue and cyan). There are also regions where cooler material (red and yellow) overlaps with the hot gas (purple). The visualization covers about 3 light years, or about 18 trillion miles, around Sgr A*. For more information, visit: https://chandra.si.edu/photo/2020/gcenter/. Credits: NASA/CXC/Pontifical Catholic Univ. of Chile /C.Russell et al.

By combining data from telescopes with supercomputer simulations and virtual reality (VR), a new visualization allows you to experience 500 years of cosmic evolution around the supermassive black hole at the center of the Milky Way.

This visualization, called „Galactic Center VR“, is the latest in a series from astrophysicists, and is based on data from NASA’s Chandra X-ray Observatory and other telescopes. This new installment features their NASA supercomputer simulations of material streaming toward the Milky Way’s four-million-solar-mass black hole known as Sagittarius A* (Sgr A*). The visualization has been loaded into a VR environment as a novel method of exploring these simulations, and is available for free at both the Steam and Viveport VR stores.

The researchers modeled winds from 25 very bright and massive objects known as Wolf-Rayet stars, which permeate the central few light years of the galaxy as they orbit Sgr A*. Wolf-Rayet stars produce so much light that they blow off their outer layers into space to create supersonic winds. Watch as some of this material is captured by the black hole’s gravity and plummets toward it.

When the winds from the Wolf-Rayet stars collide, the material is heated to millions of degrees by shocks — similar to sonic booms — and produce copious amounts of X-rays. The center of the galaxy is too distant for Chandra to detect individual examples of these collisions, but the overall X-ray glow of this hot gas is detectable with Chandra’s sharp X-ray vision.

In the visualization, different colors represent assorted objects and phenomena. The white twinkling crosses are the Wolf-Rayet stars, and their orbits are in grey (which can be toggled on and off). The blue and cyan colors show the simulation’s X-ray emission from hot gas due to the supersonic wind collisions observed by Chandra, while the red and yellow show all of the wind material, which is dominated by cooler gas and seen infrared and other telescopes. The purple is where the red and blue overlap.

The visualization spans the full simulation size, which covers about 3 light years, or about 18 trillion miles, centered on Sgr A*. Due to this large scale, the astronomers increased the Sgr A* marker by about 10,000 times. Without this enlargement, the actual size of Sgr A* would render it to be much smaller than a single pixel.

The visualization also delivers a 3D perspective through the use of VR goggles such as the HTC Vive. Each element of the simulation is loaded into the VR environment, creating a data-based simulation. By providing a six-degrees-of-freedom VR experience, the user can look and move in any direction they choose. The user can also play the simulation at different speeds and choose between seeing all 25 winds or just one wind to observe how the individual elements affect each other in this environment.

Dr. Christopher Russell of Pontificia Universidad Católica de Chile (PUC), who is now at Catholic University of America and NASA Goddard Space Flight Center, presented this VR experience on behalf of himself and his colleagues of the Instituto de Astrofísica VR Lab at the 236th meeting of the American Astronomical Society meeting that is being held virtually for the first time. The other team members are Baltasar Luco (PUC), Prof. Jorge Cuadra (PUC and Universidad Adolfo Ibáñez), and Miguel Sepúlveda (Universidad de Chile). Their simulations for this VR experience were run on a NASA High End Computing (HEC) supercomputer located at NASA’s Ames Research Center. 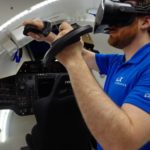