Spatial’s eponymous holographic collaboration software is one of the most impressive augmented reality apps to date, enabling lifelike 3D avatars to communicate within virtual workspaces, assuming you’re using one of nine supported devices to participate. Today, the company is announcing a partnership with AR headset maker Nreal and three cellular carriers to bring a collaborative AR solution to the mass market using 5G.

If you haven’t yet seen a demonstration of Spatial, it’s worth checking out, as the app creates a 3D avatar from a 2D photo in several seconds and uses smart tricks to translate your limb movements and speech into realistic gesture and lip motions. Users can communicate with each other, as well as displaying popular types of digital files and whiteboards inside the virtual space and streaming group content to non-participants.

Each of the new partners is bringing a key component to the table. Spatial and Nreal have been working to optimize Spatial’s software for Nreal’s affordable Light AR glasses, which provide stereo displays and audio while using a Qualcomm Snapdragon 855- or 865-based smartphone for computing power. The carriers — Germany’s Deutsche Telekom, Japan’s KDDI, and South Korea’s LG Uplus — provide the high-bandwidth, low-latency 5G network environment necessary to enable Spatial’s software to run smoothly, as well as stores to sell Nreal’s Light and the required Android smartphones.

“This combination of hardware, chipset, and carrier giants is a perfect storm for AR,” explained Spatial CEO Anand Agarawala, “just like what drove the mobile revolution in the early 2000s with smartphones, high speed mobile data, and app stores.” Nreal Light’s $500 price point and the support of 5G carriers, he said, are “throwing jet fuel into [the] fire” of existing interest from Fortune 1000 companies, including Mattel, Nestle Purina, and real estate group BNP Paribas.

Together, the group expects the cellular Nreal-powered version of Spatial to bring a larger number of participants into the collaborative AR space, while using 5G’s bandwidth to support highly complex 3D content and a wider range of content formats. While other platforms — including Microsoft’s HoloLens, Oculus headsets, Magic Leap One, Apple’s iPhones, and desktop computers — can run Spatial software, they’re largely dependent on Wi-Fi connections and potentially other input accessories. By comparison, Spatial says Nreal users will be able to leave computers behind entirely and use an entire virtual room as a screen, mouse, and keyboard, with the connected phone serving as a PC.

Nreal’s Light is already available in a $1,200 developers’ kit and will be sold in a less expensive consumer version in the next several months. Spatial says its platform will be available on consumer 5G devices later this year. 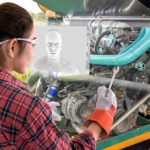 Are You Ready To Create Augmented Reality for eLearning? 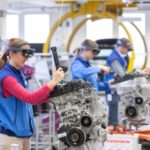