They can now create art in their own virtual reality.

The new program, which uses virtual reality goggles, allows students who may not be the adept as artists to instead excel in the creation of graphic art and animation produced on classroom laptops.

Their work, which requires art students to learn computer coding, is then transferred and viewed on high-definition goggles, immersing the teens in their own “art work” and animated scenes.

A recent class at the Butler County school saw students working to create a computerized version of a ride on a roller coaster.

“The same thing you used to do with a painting you can now do animated and in the virtual world,” said Krebs.

And the application of computer coding and other programming skills also “prepares the students for the future and it’s all about the future,” he said.

“It makes it more interesting. Now I can look at what I’ve taught for 20 years in a completely different way,” said Krebs.

Brady Eckhardt, a junior, said that he has “never had anything like this.”

“I used to hate art because I couldn’t draw but now I like this because I can do whatever I want,” he said referencing the boundless options provided by computer graphics he created, which included having his class project VR roller coaster travel around penguins, one of his favorite birds.

A $12,224 grant in 2018 from the Middletown Community Foundation helped pay for the VR goggles.

The grant funds helps pay for they VR devices at the high school so to provide all students with the opportunity to engage and learn from a virtual reality experience, said school officials.

It’s not the first time the city schools have tried to enhance learning through a virtual reality program.

Three years ago Middletown Schools participated in a free trial with Google-supplied virtual reality goggles at some of its elementary schools. But while the goggles proved popular with students, the costs of permanently installing the program with Google devices proved too expensive for the school district.

The older teens will soon use the computer coding they have learned to create a VR graphic program on the solar system that will help elementary students learn about the subject in a different more interactive way.

“It’s a really blast for both my students and the younger kids,” said Krebs. 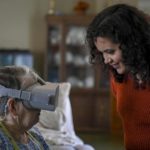 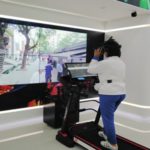