Mat Chacon uses social VR to get back in shape.

Mat Chacon, co-founder and CEO of Doghead Simulations, the company behind the VR tool Rumii, spent most of his life in remarkable shape. On his 30th birthday, he climbed Mt. Baker in Washington State and basked in the glory of his success at the summit. Whether it be biking, running, or walking, Chacon always seemed to be on the move; that is until he shifted his priorities to climbing the virtual mountain of business.

Like many entrepreneurs, Chacon found his healthy balance of work, fun, and exercise taking a back seat to his business. The result was a noticeable change in Chacon’s physique.

“I got fat,” said Chacon during an interview with VRScout.

VR is not only a visual experience, but very much a physical one where your movements in the real world are matched in the virtual world. For example, playing Beat Saber on the highest level and frantically slashing colored blocks is going to put some stress on your arms. Going toe-to-toe with Clubber Lang in a few rounds of Creed: Rise to Glory is also guaranteed to get your heart pumping and your muscles flexing.

It’s for these reasons—and many others—that Chacon decided VR was how he was going to get himself back into pre-entrepreneur shape. However, instead of using specific VR experiences, such Beat Saber, Creed Rise to Glory, and other physically-intensive titles, Chacon instead chose to pursue social VR as a way to stay motivated and consistent with his workouts. After all, he is the CEO of the company that created Rumii, a social VR tool that gives users a virtual space in which to collaborate and learn.

Instead of using Rumii for its intended purpose as a VR co-working space, however, Chacon turn the online VR space into his own personal gym, going so far as to invite other people into his virtual space to workout with him.

Social VR let him escape the drudgery of doing the same old workout routine in a crowded gym by giving him the ability to transport himself to any environment he wanted and virtually interact with meal planners, personal trainers, and fellow exercise enthusiasts. Sessions included practicing ducks and slips in a VR boxing ring, performing yoga with a trainer in Mumbai while immersed in a peaceful Japanese Zen garden, and a variety of other fitness-focused VR activities.

Chacon explains, “Working out in VR is magical and life-changing. Simply put, having the ability to workout in VR gave me discipline and focus.”

Depending on the workout, Chacon would use either an Oculus Go, Oculus Quest, or an HTC Vive to pump up his cardio. Some workouts required the tetherless 6DOF VR from headsets like the Quest, such as working out in 3D boxing ring; more simplistic exercises, such as burpees, worked best with the Oculus Go. Other times Chacon would utilize Rumii’s YouTube widget to search for exercise videos and then workout in a virtual world of his choosing.

Because the Quest and the Go are both standalone VR headsets, Chacon was able to workout while traveling for work, and he didn’t need a lot of space; he could easily workout in cramped, temporary locations, such as his hotel room.

He’d also post his workouts regularly on this Twitter page. Doing this ensured that there was total transparency with himself and the public, and the comments, retweets, and likes helped to keep him motivated with public encouragement.

All together, Chacon lost a whopping 15 pounds in just a short period of time and even gained some muscle weight.

Another part of Chacon’s success was how his VR avatar acted like a “mask” that he could use to hide his insecurities and fears, giving him the ability to open up more about his weight gain than he would have in a conventional face-to-face meeting or video chat.

There are already facilities popping up that combine traditional gyms with VR. Black Box VR in San Francisco, for example, uses a device referred to as the Dynamic Resistance Machine and hands-free controllers to deliver a blended gym experience featuring VR headsets and resistance training. Even location-based entertainment providers like The Void—which recently announced plans for 25 brand new locations—are providing active VR experiences that require players to physically move throughout their immersive environments.

When I asked Chacon if he thinks he would have achieved the same results without the help of VR, he responds by explaining how he would have found reasons not to go to the gym because of his weight insecurities.

“If anything, working out in VR has accelerated my fitness and weight loss results.”

You can follow Chacon’s Twitter account for videos and updates on his fitness journey. Interested in joining Chacon for his next workout? Download Rumii today on your VR headset and give him a shout! One thing to note, if you want to download to your Oculus Quest, you’ll have to sideload it. 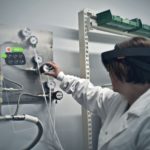 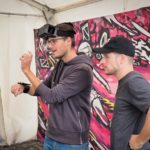