HTC Vive have created a system which allows 50 VR units to work together with no cross-interference.

In Collaboration with HTC Vive, schools in China’s NingXia Province has opened the first of 20 fully functional virtual reality (VR) classrooms that are capable of having up to 50 students concurrently using HTC Vive devices.

Alvin Wang Graylin of HTC Vive went into a little more detail about the new VR classrooms, saying that the HTC Vive team worked with the schools to create Lighthouse shielding which allowed multiple users to use the lighthouse motion tracking concurrently without interfering with each other.

According to Graylin’s Twitter posts, the HTC Vive team managed to design a special shell to contain the lighthouse tracking units which allowed the signals to co-exist in the same physical space without cross-interference. The shell was made of metal with a kind of flat paint.

There is currently little information available on what the VR curriculum at these VR classrooms entails, though Graylin did show some footage of a VR auto-repair course, which was apparently some type of same UI used to test the system. The system used allows all the students in VR to see and engage with content presented by the teacher, but not each other.

Full details of exactly what this set-up entails have yet to be released by HTC vive, but Graylin says that further information will be made fully available soon.

Presently, the interference created by multiple lighthouse trackers occupying the same physical space has created a problem for demonstrations at big events as well as location-based VR centres, so a simple solution to this problem could have a large potential impact. 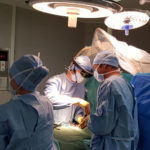 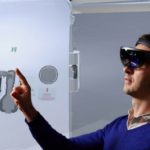